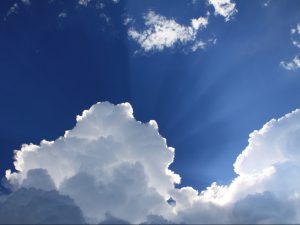 A few months ago there was a controversy from an exchange the Pope had with a young boy whose father had died. The boy wanted to know if his father, who was a good man but an atheist, was in heaven. The pope’s answer emphasized that God would not abandon someone who had a good heart—implying that the father would be in heaven because he was good, even though he did not believe in God.

As many have noted, the Pope’s answer does not match up with official Catholic teaching, which states a person “could not be saved who, knowing that the Catholic Church was founded as necessary by God through Christ, would refuse either to enter it or to remain in it.” So while the Pope did not provide an answer that matches with Catholic teaching, he did provide an answer that matches with the unofficial creed of Moralistic Therapeutic Deism.

What Do People Believe?

Good people go to heaven when they die

In the summer of 2002, nine miners were trapped for over 3 days in the Quecreek Mine in Pennsylvania. After they had all been rescued, one of the miners shared a brief conversation he had with a fellow miner.

“This young miner said that he asked an older veteran during the ordeal, ‘Will I go to heaven. . . cause I know the Bible says you’ve got to be baptized to go to heaven, and I haven’t been baptized.’

His co-worker and friend, in an attempt to comfort the concerned man, responded, ‘All good people go to heaven,’ and then he stressed, ‘. . . no matter what.’”

That miner was simply stating what most people believe: heaven is a reward that you earn. 71 percent say people must contribute some effort toward their salvation.

Americans still believe hell is real, but only really bad people go there. Only 18 percent of Americans say small sins should lead to damnation.

For most people, God is less like a father and more like a grandfather, who may ask you to do things and occasionally threaten discipline but will inevitably let you slide. People think God wants goodness but ultimately forgives anyway.

One of the reasons people are convinced that good people go to heaven is they think of heaven as just a great place where you can enjoy the good life. It’s simply a state of bliss, where everything is peaceful and calm; a prize for those who navigated the difficulties of this life well.

What Does the Bible Say?

One of the central teachings of the Bible is that no one is good. Even our best works are like filthy rags compared to God’s goodness (Is 64:6). Paul’s use of the Old Testament to demonstrate the universal nature of sin and condemnation in Romans 3 includes the clear statement that “no one does good, not even one” (Rom 3:12). Rather than being good, we are actually all sinners who have not lived up to God’s standard of perfection (Rom 3:23). Which means if good people go to heaven, we are all on the outside.

The Bible is also clear that the only answer to the problem of universal sin is Jesus Christ. While it is common in our day to think that several religions can help make us moral and get us to paradise, Jesus’ death is incompatible with that view. Why would Jesus humble Himself, live as a servant, and suffer and die if people can earn heaven through their good works? Instead, the Bible insists that Jesus is the only way to the Father, because no one else can offer salvation (Jn 14:6; Acts 4:12; 1 Tim 2:5-6a).

Since we cannot earn our salvation, heaven is not a reward but a gift. The only “reward” we earn is death. But God in mercy offers us the glorious gift of eternal life (Rom 6:23). Since heaven is not something we earn, we can take no pride in going there (Eph 2:8-9). Instead, God receives the glory, because of His goodness and loving-kindness (Tit 3:4-7).

It is vital for us to know that we are sinful rather than good, because God is not a loving grandfather who ultimately winks at wrongdoing but a just judge who will punish every sin—even our sins done in secret (Ecc 12:14; Rom 2:6-11; 1 Pet 1:17). And the punishment for sin against an infinitely holy God is infinite destruction in hell (Ps 145:20; Matt 13:40). Hell is for really bad people, but we are all really bad people. Yet God in His grace bore the punishment we deserved, so that we might be set free.

Those who have experienced that work of grace understand that the gift of heaven is ultimately about God, not just a good life. Eternal life is knowing God (Jn 17:3). Death is gain for the Christian, because he now gets what matters most to him in life, Jesus Christ (Phil 1:21, 23). What we as Christians long for is the day in which we can say that we now dwell with God, as His people.

And I heard a loud voice from the throne saying, “Behold,the dwelling place of God is with man. He will dwell with them, and they will be his people, and God himself will be with them as their God….And he said to me, “It is done! I am the Alpha and the Omega, the beginning and the end. To the thirsty I will give from the spring of the water of life without payment. 7 The one who conquers will have this heritage, and I will be his God and he will be my son. Rev 21:3, 6-7

Since our society does it’s best to avoid the reality of death, it is often at funerals that we forced to consider what happens after death. In those situations, it is easy to find ourselves adopting the belief that good people go to heaven. In an effort to comfort, we say to someone “He’s in a better place” even when we have little to no confidence the man ever trusted Christ. Even during a funeral service, it is easy to give the impression that the reason we believe this person is in heaven is because of how good he was rather than because God was gracious to him in spite of his great sin.

It is also increasingly common for Christians to almost sound surprised or at least apologetic that God would judge sin rather than forgive it. But from a biblical perspective, it should be the opposite. We should be shocked that an infinitely holy God would forgive sin!

Finally, it is easy for Christians to focus on the side benefits of heaven rather than its greatest joy. We often speak of heaven primarily in connection with seeing loved ones who are there now, or the joy of no longer dealing with the pains and challenges of this world. While those are certainly good, by far the greatest joy of heaven is that we will be with God. That hope is what should dominate our conversations about heaven.

When we understand the reality of hell, it should spur us to share the gospel. Since we recognize that no amount of goodness can keep anyone out of hell, the only hope they have is for God to save them through Jesus Christ. And the only way that salvation will occur is if someone tells them the good news that Jesus Christ made it possible for us to be right with God.

As we talk to others, we cannot allow them to deceive themselves into thinking they are good. Rather, we must continually challenge them to realize their own wickedness so that they can see their hopeless condition.

We must also show that hell is the righteous way to address sin. When we understand how wicked we are, we then must understand that God could not simply sweep our sin under the rug and remain just. Evil must be punished, and hell is the only way for us to bear that punishment. But the good news of the gospel is that Jesus suffered that kind of punishment for us so that we do not need to bear it ourselves.

Finally, we must highlight the greatest reward of salvation—knowing God. This promise means nothing to those who are perishing, but when God removes the blinders from someone’s eyes this is what they want: “the light of the knowledge of the glory of God in the face of Jesus Christ” 2 Cor 4:6.