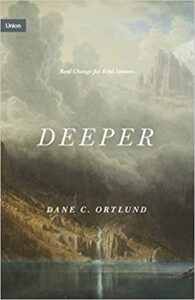 Three things excited me about this book. First, it deals with sanctification, a topic central to the Christian life. Second, it is in a series of books called Union, which is edited by Michael Reeves. I reviewed one of the titles in this series before (Rejoice and Tremble: The Surprising Good News of the Fear of the Lord) and thoroughly enjoyed it. Finally, the book is written by Dane Ortlund, who recently wrote Gentle and Lowly, a book immensely helpful in considering the attitude of Christ towards those He calls His own.

One of the reasons I enjoy both Reeves (the editor of the series) and Ortlund (the author of this book) is that they make great use of the Puritans. Anyone who has attempted to read the Puritans knows that the content of their books is much like their book titles—unnecessarily long. Nevertheless, the Puritans have much good to say, and Reeves and Ortlund have mined their depths, found their gems of wisdom, and repackaged their truths in modern language.

In the introduction, Ortlund suggests that people approach sanctification in different ways. Some think it requires action (changing activities). Others think it requires thinking (changing meditation). Still others think it requires feeling (changing emotions). While not denying any of these, Ortlund says that true change “transcends them all. Growing in Christ is . . . deepening. Implicit in the notion of deepening is that you already have what you need. Christian growth is bringing what you do and say and even feel into line with what, in fact, you already are” (16).

Summary of the Book

The book is divided into nine chapters. The following is a brief overview of each chapter:

1: Jesus – Sanctification happens in relationship with Jesus, who is greater than any of us imagine. This chapter walks through the power, glory, and gentleness of Jesus. Beginning here shows that sanctification is only possible when we know the real Jesus.

2: Despair – Though we may think of self-despair as something necessary at salvation (e.g., in repentance), Ortlund reminds us that it is a fruitful exercise throughout the Christian life for sanctification. He notes that believers “cannot feel the weight of [their] sinfulness strongly enough. I never met a deep Christian who did not have a correspondingly deep sense of his or her own natural desolation” (41). He adds, however, that we are not to remain in despair; rather, our despair is to drive us back to Jesus, who has accepted us and covered our sin.

3: Union – In my estimation, this was the heart of the book. In this chapter, Ortlund highlighted the role that union with Christ plays in our sanctification. He calls union the umbrella doctrine, for under it “every benefit of salvation is subsumed” (62). Understanding this doctrine helps us make sense of Paul’s answer to the question in Romans 6, “Why not continue in sin”? Paul’s answer is, in short, “because that is not who you are in Christ!” Union makes sanctification possible.

4: Embrace – This chapter could be viewed as a short summary of Ortlund’s book, Gentle and Lowly. In sum, until we understand the heart of Christ for sinners (including ourselves!), we will not grow as we otherwise might. For those who think little of meditating on the love of Christ, Ortlund draws attention to Ephesians 3:16–19, where Paul’s pastoral prayer is that the readers would “know the love of Christ which passes all understanding.”

6: Honesty – This chapter focuses on the role that other believers have in our sanctification. More specifically, it highlights the need for honesty regarding our sins before other believers, who can help us walk in truth.

7: Pain – Ortlund reminds us that according to the New Testament, pain is “a means, not an obstacle, to deepening in Christian maturity” (125). Indeed, “Deep wounds deepen us” (135). There are fundamentally two types of pain, Ortlund tells us. The first, and the one we immediately think of, comes to us from the outside. These are life’s trials. The second is sourced from within, from one’s own desire for holiness. Following the Puritans, Ortlund refers to this as the mortification of sin. In other words, there is pain in holiness as we grow to hate the sin that we paradoxically love.

8: Breathing – Using the analogy of breathing, Ortlund highlights in this chapter the necessity of reading the Bible (breathing in) and praying (breathing out) for sanctification.

9: Supernaturalized – This final chapter summarizes the role of the Spirit in making us grow. He is the means by which we are turned to Christ and are able to go deeper. In seeking the Spirit’s work, however, we do not look directly to the Spirit; rather, we look to Christ, and through looking to Christ the Spirit changes us (169).

Having summarized the volume, we can now turn to an evaluation. First the positive, then a few concerns.

There is much I could say positively about the volume. The focus on union with Christ as the basis for sanctification was rightly placed. Further, the relation of justification to sanctification was handled in a way that preserved the separation of the two yet indicated that the one could not exist without the other. Finally, as we have come to expect of Ortlund, the literary quality of the book is excellent. Not only are there plentiful productive analogies, but numerous times I highlighted whole sections due to the way in which truth was expressed with concise creativity.

Having praised much of the volume, I do find two areas that could have been further clarified. First, some of the language of the book could be taken to suggest a sanctification model that stresses a moment of change (Keswick/Higher Life Theology). To be clear, I do not think Ortlund is endorsing such a model, but some passages struck too close for my comfort. For instance, Ortlund says, “You’ll never get there [i.e., to allegiance to Jesus] until you first try living for Christ out of your own strength and discover just how fearful and cautious and spiritually impotent you are on your own steam. It’s then, as you give up on yourself and throw your hands up in the air, that your heart is most fertile for the supernaturalizing power of the Holy Spirit” (167).

Further, in his chapter on acquittal, Ortlund highlights the stories of three Christians (Martin Luther, C.S. Lewis, and Francis Schaeffer). Regarding the latter two, he details an experience later in life that transformed them. Notably, this was not their acceptance of the gospel; it was some other experience of grace that brought them to a new level of spiritual living. For Lewis, Ortlund says, this “late-in-life-awakening” came home to him “in a decisive and permanently transforming way” (105). In relation to Schaeffer, there was a “similar post-conversion discovery of the gospel, . . . which proved to be the turning point of his life and ministry” (107).

Importantly, Ortlund does not suggest that such experience is normative, nor does he indicate that it is necessary. Further, he argues that these men found themselves “coming back in a post-conversion way to the liberating truth of the same gospel” (109). In other words, the gospel that saved them led to the experience that motivated them to continue on the path of discipleship. Accordingly, I do not think Ortlund is endorsing a Keswick sanctification view, but the language is close enough to have warranted further clarification and perhaps a clear rejection of the Keswick view (See Nasselli’s No Quick Fix).

The second point of concern is likely due to an intentional emphasis by Ortlund. In my view, it results in an imbalance. As Ortlund sees it, the main way one grows is by looking to Christ. In his words, “This is a book with one point: Be astonished at the gracious heart of Jesus Christ, proven in his atoning work in the past and his endless intercession in the present. Receive his unutterable love for sinners and sufferers. Stop resisting. Let him draw near to you. Gaze upon him. As you do so, transformation will come in the back door” (171).

I will not argue against the main point here, but I do think it presents only one side of the coin. In a book on sanctification, I was surprised to find almost no consideration of the role of believer in “working out their own salvation with fear and trembling” (Phil. 2:12–13). There seemed to be little emphasis on the believer “making every effort” to mature (2 Pet 1:5–8). Relatively little is spoken of the believer’s actively pursuing the means of grace.

Only two chapters address our active role in sanctification. One focused on Bible reading and prayer. The second focused on “pain” and included mortification of sin. Ortlund recognized that the “teaching on mortification is the most active facet of our growing in Christ. The other chapters of this book focus primarily on what we receive in the gospel” (136). But even when speaking of mortification, the human element is minimized. Indeed, his definition of mortification is one I am not sure John Owen would recognize: “There is no special technique to mortifying sin. You simply open your Bible and let God surprise you each day with the wonder of his love, proven in Christ and experienced in the Spirit” (140). For Ortlund, “we don’t kill sin the way a soldier kills an enemy in battle, by zeroing in on the enemy himself. Killing sin is a strange battle because it happens by looking away from the sin” (emphasis original; 139).

How does sanctification happen? It seems that in Ortlund’s view, it happens by looking to Jesus. As we view him, the things of this world fade in their beauty as he shines in his glory. With this, I agree; however, it is only part of the process. In sum, I think the human side of the equation is not sufficiently emphasized in this book. Where do Jesus’ admonitions to cut off our hand or pluck out our eyes come in (Matt. 5:29–30)?[1]

If I had to guess, I think Ortlund would affirm what I wrote above. In the introduction to the book, he notes that he is seeking in this volume to avoid methods that emphasize what the believer must do (18). Nevertheless, in my opinion, more emphasis on true mortification would have provided a helpful balance to the overall presentation. As it stands, believers could walk away from this volume thinking that their addictive behavior can simply be solved by greater looking to Jesus.

I think this is a good book. It may be slightly unbalanced, but the side it emphasizes is expressed with clarity and conviction. It may also be less clear on Keswick theology than I would like. Nevertheless, what it affirms is true and lovely. Accordingly, I encourage you to pick up this book and think on these things.

[1] In fact, Ortlund’s theology in this volume leads in the direction of needing more emphasis on the human side. Union, for example, means that as we are united to Christ, we are infused with new life (Rom. 6:1–4). But this new life demands our denying sin and refusing to use our members for unrighteousness (Rom. 6:5–11). Accordingly, as Ortlund himself highlights, sanctification occurs from the inside out.