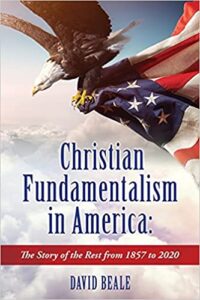 It’s been several years since I have taken time to write anything other than Tweets about Fundamentalism, but a new book and a blog post piqued my interest recently. When I saw that Dr. David Beale, under whose teaching I greatly benefitted as a college student and afterward when he’d come to speak here, had recently published Christian Fundamentalism in America, I immediately ordered it. I am very fond of his early work, The Pursuit of Purity, so I was eager to see how this new book interacted with the years between its publishing (1986) and the present day.

When it arrived, I was disappointed to see it really didn’t say much about those intervening years. Basically, it covers the same terrain as Pursuit of Purity plus adds a few sentences here and there to sum up the almost four decades of recent history. It says almost nothing regarding the battles that were fought among professing Fundamentalists or in defense of Fundamentalism, or the rise and fall of Fundamentalist educational institutions. Like Pursuit of Purity it had a distinctly BJU-centric take on Fundamentalism, only less positive this time around.

I guess I shouldn’t have been surprised when this particular quote from the book started making the rounds: “After being the premier Fundamentalist academic institution for eighty-seven years, BJU elected Steve Pettit in 2014, as the president who steered the University out of separatist Fundamentalism into the inclusive, Broad Evangelicalism” (Beale, Christian Fundamentalism in America, p. 530). Frankly, I expected it to be used by those who love to use these kinds of quotes to prove they are the “true” Fundamentalists. What I didn’t expect was for it to be treated seriously by any who take Fundamentalist history seriously.

I don’t think most observers of the ecclesiastical world actually believe these are the only two categories today. Kevin Schaal, president of the FBFI, recently wrote, “Generally, I would define broader evangelicalism as characterized by a willingness to fellowship and join in ministry with theological liberals. Conservative evangelicals will typically oppose and separate from false teachers, but do not practice separation from those who bid Godspeed to false teachers. Fundamentalists will separate from both. These are simplistic identifiers, but I believe they are fairly accurate)” (Kevin Schaal, “Confrontation and Christian Leadership”)

While I would actually differ with Kevin on the definition of a Conservative Evangelical, we agree that not all Evangelicals actually fit within Dr. Beale’s definition of Broad Evangelicalism. Dr. Beale’s definition was accurate from the mid-20th century for the next few decades, but probably has been outdated since the late 1990s, certainly by the early 21st century. Beale’s taxonomy presents two coherent groups, Fundamentalists and Broad Evangelicals, but the ecclesiastical landscape is not at all like that. At least Kevin’s definition recognizes this somewhat, and he has acknowledged elsewhere that defining Fundamentalism is not an easy task.

Accepting Dr. Beale’s definition on its face, though, means his charge against BJU is false. I have seen his explanation for the charge and it does not prove that BJU prefers “to identify with false teachers under the broad umbrella” or that they are guilty of “joining liberals in ecumenical campaigns.” This is the flaw in seeing the world only in terms of Fundamentalism and New/Broad Evangelicalism. It leaves no room for the group that Kevin recognizes, so it fails to accurately address the separation problem in our day. Rather than help the cause of biblical separatism, this approach really weakens it by the misapplication of biblical truth and creating the impression that Fundamentalism has always been in lockstep agreement on how to relate to those parked between Fundamentalism and New/Broad Evangelicalism.

I wish Christian Fundamentalism in America had made an effort to address the fragmentation in Fundamentalism more earnestly and more carefully. There is history to be told there and it will never be understood properly if the realities of the present ecclesiastical landscape are glossed over to preserve definitions that fit the mid-20th century but are no longer accurate. Dr. Beale’s approach is like using a map from the Soviet Union era to travel through Eastern Europe looking for Yugoslavia in 2021. We won’t be able to practice separation properly unless we update the map.

Those of us who agree the Bible teaches separation from both those who deny essential doctrines of the Christian Faith and those who grant Christian recognition to them need to wrestle through how to address the current landscape. We need unity on the principles before we can debate the applications. We won’t all agree on every application, but when have Fundamentalists ever agreed to that level? In reality, when one group of Fundamentalists demands that everyone accept their applications, that has produced division among those who should be united. It has produced multiple Fundamentalisms, with each professing themselves as the true heirs of Fundamentalism. Unfortunately, I think this comment by Dr. Beale (and its use by some folks) is part of that problem, not its solution.