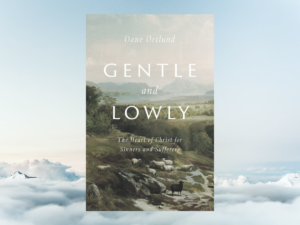 Last week I published a short post, encouraging this blog’s readers to pick up a recently released book, Gentle and Lowly. This post will highlight some particularly helpful elements of the book.

Before doing so, it would be helpful to express the book’s structure. There are twenty-three short chapters, each is a brief analysis of a particular passage. Though not every chapter exhibits the following pattern most do: a brief exegetical analysis which highlights the salient points under consideration, a puritan’s comments on the passage, and some concluding observations applying the passage to modern believers.

This is not a book designed to introduce new doctrines or even to upset old ones. Its value is in helping readers see the implications of what they already believe. In fact, almost every one of the chosen passages is well-known. Despite this, Ortlund is able to bring a fresh perspective, partly because of the focus on historical commentary.

But it is not just that. Ortlund has a reason for choosing each passage, and the overall presentation of these passages together highlights the way the Bible consistently speaks about the heart of God/Christ for His people. By focusing on this theme through various passages, Ortlund encourages the reader to see these passages as a connected whole. On more than one occasion this allowed me to see something new in a well-known passage. New, not because of Ortlund’s eisegetical skills, but new because the passage was seen from a fresh perspective.

This book focuses primarily on the heart of Christ for sinners. Since the focus is Christ, it is unsurprising that Ortlund begins with Matthew 11:28–30, where Jesus describes His own heart: “I am gentle and lowly in heart.” Ortlund notes that our natural inclination is to disbelieve this about God and Christ. He says, “This is why we need a Bible. Our natural intuition can only give us a God like us.” (p. 23). Later he says, “I am seeking to help us leave behind our natural, fallen intuitions that God is distant and parsimonious and to step into the liberating realization that he is gentle and lowly in heart” (110–11).

A few highlights of the book for me include the following:

First, Ortlund makes a powerful cumulative case for the claim that Jesus runs towards his elect, not away from them when they are most despicable. Consider the following quotes:

The cumulative testimony of the four Gospels is that when Jesus Christ sees the fallenness of the world all about him, his deepest impulse, his most natural instinct, is to move toward that sin and suffering, not away from it (29).

When we hold back, lurking in the shadows, fearful and failing, we miss out not only on our own increased comfort but on Christ’s increased comfort. He lives for this. This is what he loves to do. His joy and ours rise and fall together (36).

Second, Ortlund argued, and I think persuasively, that our greatest need is to see the goodness of God. Many believe it is to see the glory or greatness of God, but the glory and greatness are actually revealed in His goodness. He draws this from the episode between God and Moses. Moses asked to see God’s glory, and the surprising answer was “I will make my goodness pass before you” (Ex 33:19). In further support, he quotes Psalm 138:5–6: “Great is the glory of the Lord. For though the Lord is high, he regards the lowly.”

Third, the author drew out a helpful distinction between intercession and advocacy. I had generally thought of the two as parallel concepts, but Ortlund highlighted the different pictures each suggests. He summarizes it in the following quote, which is followed by a quote from Bunyan:

Intercession is something Christ is always doing, while advocacy is something he does as occasion calls for it. Apparently he intercedes for us given our general sinfulness, but he advocates for us in the case of specific sins (p. 79).

As I conclude this review, I want to highlight one more truth Ortlund helped me recognize. As we noted above, Ortlund’s purpose in writing was to dissuade people from their natural, fallen view of God. He wanted instead to reveal what God is really like. One way he did so was by answering the question, What is natural to God?

His most powerful expression of this truth was through his consideration of Lamentations. He highlighted the structure of Lamentations and noted that chapter three contained the “theological bullseye” of the book: “For he does not afflict from his heart or grieve the children of men” (Lam 3:33; 119). Ortlund then quoted Goodwin:

In these acts of justice there is a satisfaction to an attribute, in that he meets and is even with sinners. Yet there is a kind of violence done to himself in it, the Scripture so expresses it; there is something in it that is contrary to him. “I desire not the death of a sinner” (120).

Goodwin goes on to say what is natural to Him on the basis of Jeremiah 32:41:

But when he comes to show mercy, to manifest that it is his nature and disposition, it is said that he does it with his whole heart. There is nothing at all in him that is against it. The act itself pleases him for itself. There is no reluctance in him (121).

Goodwin brings it together in a final paragraph:

“God has no pleasure in the destruction or calamity of persons or people. He had rather they should turn and continue in peace. He is well-pleased if they forsake their evil ways, that he may not have occasion to execute his wrath upon them. He is a God that delights in mercy, and judgment is his strange work.”

In sum, this book seeks for us to take seriously that “The only two words Jesus will use to describe his own heart are gentle and lowly (Matt. 11:29). And the first two words God uses to describe who he is are merciful and gracious (Ex 34:6)” (128).