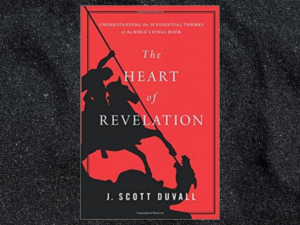 Recently, I have been reworking my notes on the book of Revelation for a survey course I teach at the seminary. Since I do not have the luxury of spending months preaching through the book (as Pastor Jacob recently encouraged us to do), I was considering how to present the themes of the book in a succinct and accessible manner. Since Dr. Bruce Compton is currently writing a commentary on Revelation, I asked him for a recommended resource. He pointed me to The Heart of Revelation by J. Scott Duvall.

I should say that Dr. Compton did not recommend the book; rather, he recommended that I read the book and get back to him concerning its usefulness (see what he did there?). This blog post is my response.

This book comes alongside Duvall’s commentary on the book of Revelation (Teach the Text Commentary Series). It is obvious that he has a good grasp of the overall message of the book. His goal in this volume is not to walk expositionally through the text; rather, his subtitle reveals his goal: “Understanding the 10 Essential Themes of the Bible’s Final Book.”

The following is a list of his ten themes:

As far as themes go, Duvall hits all the major ones, and he does a fantastic job walking through the text, showing how each is developed. This is not a scholarly tome; it is written at a level a Sunday School class could read it and benefit. Duvall fills the pages with explanatory material and examples from everyday life. He energizes the book in places where it otherwise might become dull.

Having said some positive things, I can’t overlook some negatives. These are all based on my understanding of a proper interpretation of Scripture. Duvall begins the work noting some principles of interpretation, which he says guides the way he reads the text and should guide the way others read the text. In fact, his three principles I heartily agree with (9–10). First, he calls us to try to discover the meaning for the original audience. Second, we are to “take Revelation seriously, but we shouldn’t always take it literally.” Finally, he suggests we should focus our attention on the main theological message and not get caught in the weeds of minutia.

Hidden within that second principle, however, is a vast chasm of difference. No dispensationalist I know takes everything literally in Revelation (does Jesus have a sword coming out of his mouth?; 19:15). It becomes clear fairly quickly that Duvall finds much more figurative significance to Revelation than I would.

It might be helpful to highlight a few elements Duvall takes figuratively that I think have a more literal fulfillment in mind. First, he argues that the two witnesses represent “the witnessing church and its role in reflecting God’s presence in a hostile world” (17). Second, the 144,000 is “a number that results from taking twelve (the number symbolizing completeness as well as the people of God), squaring it, and then multiplying the result by one thousand (signifying a very large, complete number). The resulting number represents all followers of Jesus or the true Israel of God now sealed and engaged in spiritual battle” (15). Finally, he argues that the mark of the beast on an unbeliever is a “figurative sign of their idolatry evidenced through their actions (right hand) and their thinking (forehead)” (186).

By the comments he makes throughout the book, it appears he grew up in a church where there was an overblown interest in eschatological teachings. He laments works of literature that falsely portray as literal what he thinks is figurative (2, 61). I can only assume he is speaking of the Left Behind Series.

Because of our differences in interpretation, I often found myself agreeing with Duvall’s point but not the text he drew it from. Stated differently, I agree that the ten themes he portrays are main themes in Revelation; nevertheless, I would argue that the application of many of them is wrongly derived or wrongly applied. For instance, I do think Revelation motivates us towards mission, not because we are represented by the two witnesses, but because we see God’s heart for the nations displayed throughout the text.

On the whole, there is much value in this work. To be honest, my surprise was not that we disagreed on so many things, but rather that we agreed on so many. That is not to say that our differences do not matter—they do. It is to say that the main message of the book of Revelation (the forest) is revealed so clearly that those who disagree about the details (the trees) can still find some common ground.

In conclusion, I plan to encourage Dr. Compton to produce a competing volume from a dispensational perspective once his commentary is completed.