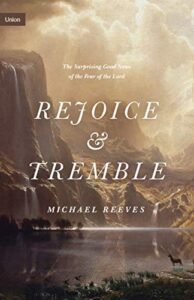 Books don’t often make grown men cry with joy, but I have heard that Reeves’s book on the Trinity (Delighting in the Trinity) has done so. That book is still on my reading list, but when I heard Reeves recently wrote a book on the Fear of the Lord, I knew I had to read it. I read it to get exposure to Reeves’s work, but I also read it because I am fascinated by the topic of the Fear of the Lord.

Reeves begins with a great question: Is fear good or bad? On the one hand, Jesus came to deliver us from fear (Lk. 1:74–75; Heb. 2:15); on the other, we are called to fear God (Prov. 1:7; Ps. 86:11; etc.). Reeves’s book is designed to “cut through this discouraging confusion” (16). His goal is that readers would be able to “rejoice in this strange paradox that the gospel both frees us from fear and gives us fear. It frees us from our crippling fears, giving us instead a most delightful, happy, and wonderful fear” (16).

Setting us Free from Fear

Reeves argues that there are multiple types of fear. First, natural fear is the fear of pain, accidents, and death. These are the result of the fall, but they are not sinful in themselves. A second form of fear he calls “Sinful Fear,” which gets its name because it derives from our sin. We fear God as judge because we know we are guilty before Him. Finally, there is the fear of the Lord (I will call it Righteous Fear, though Reeves simply calls it “Fear of the Lord”), which is the center of discussion later in the book.

Despite living in times where safety is undeniably greater than at any point in world history, many people live in perpetual fear. Anxiety is rampant. Reeves argues that ﻿“the loss of the fear of God is what ushered in our modern age of anxiety, but the fear of God is the very antidote to our fretfulness” (24).

Fear does not merely derive from uncertainty though; it sometimes derives from certainty—the certainty that God is holy and we are not. This realization, present in all humans, contributes to a Sinful Fear that leads men to flee from God. They hate His holiness, and they fear the life of holiness he would bring in their lives. Further, they know He will judge, and they know they will be guilty.

Sinful Fear is the natural state of man before God. The fanning of such fear is the grace of God, awakening the sinner to the reality of his predicament. As the old hymn says, grace teaches the heart to fear, and only then can grace that fear relieve.

What is this wonderful and blessed “Fear of the Lord”? Ironically, this Righteous Fear derives from seeing God’s goodness. These concepts appear opposite. Do we really fear those who are abundantly gracious? Jeremiah confirms this: “﻿I will cleanse them from all the guilt of their sin against me, and I will forgive all the guilt of their sin and rebellion against me. And this city shall be to me a name of joy, a praise and a glory before all the nations of the earth who shall hear of all the good that I do for them. They shall fear and tremble because of all the good and all the prosperity I provide for it.” (Jer. 33:8–9; p. 46).

The reference to trembling in connection to fear in that passage (cf. Ps. 2:11; Phil. 2:12) indicates the connection between Sinful Fear and Righteous Fear (57). They both observe the Lord and His character resulting in an emotional and embodied response of trembling. The Sinful Fear of the Lord trembles because of dread of the holiness of God; the Righteous Fear of the Lord trembles because of the overwhelming goodness of the Lord.

Reeves addresses the question as to whether another translation might capture the essence better: “﻿the fear of God is no mild-mannered, reserved, or limp thing. It is a startlingly physical, overpowering reaction. And so, respect and reverence are simply too weak and grey to stand in as synonyms for the fear of God. Awe seems a much better fit, though even it doesn’t quite capture the physical intensity, the happy thrill, or the exquisite delight that leans toward, instead of away from, the Lord” (58).

Though fear might not fully capture the meaning of the Greek and Hebrew perfectly, Reeves argues it remains our best translation. In addition, however, “﻿If people are to appreciate how the fear of God is distinct from all other fears, synonyms alone will not do: it must be unfolded and taught” (59).

In this review, I have merely scratched the surface of this text. In fact, I only covered the first three chapters of an eight-chapter book. Chapters four and five give alternative sources for the Fear of the Lord. The first is a fear derived from considering God as Creator (Ch. 4). The second is derived from considering God as Father (Ch. 5). Reeves masterfully connected these, showing that only those who experience God as Father (and thus experience the grace of conversion) can ever truly experience a Righteous Fear when they observe creation. Righteous Fear casts out Sinful Fear, for those who know God’s goodness can no longer fear Him as they used to fear Him.

Chapter six gives guidance for how to grow in this fear. In this chapter, Reeves rightly highlights that Righteous Fear is not a human fabrication but is a gift of God. As such, it cannot be mechanically controlled. Nevertheless, God has indicated the ordinary means of grace by which mankind can place themselves in the way of such grace. The final two chapters address the way this fear should cause us to view our present life (ch. 7) and the future eschaton (ch. 8).

In conclusion,I wholeheartedly endorse this book. It has the rare combined qualities of being devotionally rich, exegetically grounded, and a pleasure to read. Reeves is right; we cannot simply use a different word to capture the essence of what Scripture means by “The Fear of the Lord.” We need to explain it, and this book is an excellent place to start.