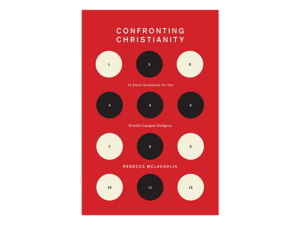 Is the world better without religion? Doesn’t Christianity crush diversity? Doesn’t religion hinder morality? These are just a few of the twelve questions addressed by Rebecca McLaughlin in her debut book, Confronting Christianity: 12 Hard Questions for the World’s Largest Religion.

The choices of questions are not random; rather they reflect the questions McLaughlin has repeatedly heard over her years serving as the vice-president of content at the Veritas forum. Some questions are classical (e.g., how could a loving God allow suffering?) while others are modern (e.g., isn’t Christianity homophobic?). On the whole, the arrangement is unique and allows this book a place alongside the similar works by Tim Keller (The Reason for God, Making Sense of God).

I am comparing McLaughlin’s work to Keller’s work intentionally, for I think they fall into the same broad category. They are written for the more educated of our world who question the essence of Christianity. Further, they both are attempts at pre-evangelism. That is, the books are not designed as tools to proclaim the Gospel; they are designed to remove the obstacles from people hearing the Gospel.

Both Keller and McLaughlin are aware of the broader currents of modern thought and both show an uncanny ability to use secular literature and themes to illustrate biblical principles. Because of these similarities, a friend of mine said McLaughlin’s work seems derived. I can see why some might say that, but she does cover material from a unique vantage point and even when there is an overlap of themes, she approaches the topics in a fresh way.

On the positive side, there is much to commend here. The most memorable parts for me were the times she turned the tables. For instance, she notes that people often think of Christianity as Western and non-diverse, but it certainly did not start in the West, and actually the majority of people who identify as Christian are not Western (a fact that will only increase if the predictive models are correct). In her words, “Contrary to popular belief—Christianity is the most ethnically, culturally, socioeconomically, and racially diverse belief system in all of history” (p. 40). On the opposite side, it is atheism that is a predominantly white, male viewpoint.

The weakest section of the book, in my opinion, was the final chapter, where she addresses the topic of hell. She starts out with an honest assessment of the problem, noting that it is a difficult issue to address in an apologetic sense. She also masterfully focuses on the darkness of the human heart, an approach central to an appropriate answer to why the wrath of God is warranted.

All of this is great, but when she comes to define heaven and hell she falls short. Here is what she says: “Heaven, in biblical terms, is not primarily a place. It is a shorthand for the full blessing of relationship with God. . . . Hell is the opposite. It is the door shut in the face of the wastrel son, the divorce certificate delivered at the moment of remorse, the criminal receiving his just deserts” (p. 233). Now, I think I could defend every statement she makes here. The problem is not with this statement, but with the fact that this is the entirety of her description. Stated shortly, I am afraid that those who have heard of the doctrine of hell and turn to this book for help will wonder whether this is really a serious treatment of the issue.

The most personal chapter of the book—and likely the most controversial—is about Christianity and homosexuality. It is personal because the author reveals that she has struggled with same-sex attraction since childhood. It is controversial because the author clearly falls on the side of those who believe SSA is something that God can but does not always take from believers and that these attractions are not in themselves sinful unless indulged. For the most comprehensive response to this see, Denny Burk’s “Is Homosexual Orientation Sinful?” (JETS, 2015: 95–115).

While one’s view of her success in this chapter will majorly hinge on this issue, she also says things that all believers can agree with. She highlights that Christianity has always been counter-cultural in regard to sexual ethics, and she powerfully displays the distinctions between race and sexuality. This latter point is important because many people equate race with homosexuality, noting that just as the US has sought to eliminate racial discrimination, it should now eliminate sexual discrimination.

In conclusion, this short book could serve as a helpful introduction to some ways to address these complex issues. For those who are already aware of most of the apologetic talking points, there is little new here, though what is said is expressed creatively.