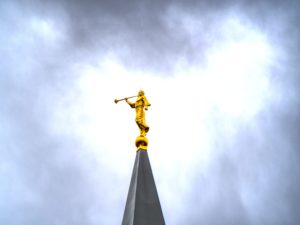 This is a review of the book, The Saints of Zion: An Introduction to Mormon Theology

Are Mormons Christians? If you don’t know the answer to that question, or if you know the answer but don’t know why your answer is right, then this book is written for you. The author, Travis Kerns, wrote his dissertation on Mormonism and also resided in Utah from 2013–2019, living among the Mormons while seeking to evangelize and plant churches.

This is not your average primer on Mormonism. It also isn’t what you might normally think of as an apologetic work against Mormonism. Instead, it seeks to lay out the theological perspective of the Mormon church in a systematic way. While Kerns makes comments throughout, they are limited and seek only to point out the differences between orthodox Christian faith and Mormonism. He makes clear that Mormons are not Christians, but does so by pointing out that this has been the claim of the Mormon church itself throughout history (despite recent attempts to argue differently).

Writing a systematic theology of the Mormon church is more challenging than you might think, for Mormons themselves have not really attempted it on a large scale. Kerns points out at least two reasons for this. First, Mormons believe in a living tradition. Consequently, past revelation is not as significant as ongoing revelation. Second, subsequent revelation can supersede prior revelation. Nevertheless, since there are numerous religious sources of authority that have been documented (whether the holy books or the direct revelation of the Mormon presidents), Kerns is able from these to deduce the theological system of Mormonism.

There are six chapters. The first introduces Mormonism, giving the statistics of membership, overviewing their missionary activity, and even talking about the financial affairs of the church. Chapters 2–4 are the core of the doctrinal expositions. Chapter two deals with theology proper, three with sources of revelation, and four with salvation. The fifth chapter details the history and organization of the church. A final chapter answers the question, “Are Mormons Christian?”

Indeed, the whole book leads to this final chapter. To get there, Kerns takes a different path than some apologists might. He allows Mormons to speak for themselves. Though this is my own estimate, I would say nearly 40% of the book is quotation from Mormon authors. Opponents can say much about the book, but they can’t say that it does not fairly represent Mormon belief. Indeed, Kerns, unlike some other apologists, avoids cheap shots. I get the feeling that he wanted a book that a Mormon could read and say, “Yes, that is what I believe.”

Oddly enough, I think that clearly exposing the beliefs of Mormonism was one of Kerns’s chief methods of apologetic interaction. Stated differently, one way to evangelize Mormons is to teach them what their own religion claims. One of my friends who lives in Salt Lake told me that a Mormon was trying to evangelize him and after explaining a few odd concepts affirmed, “I know this sounds crazy, but it is true!” Kerns simply lays out the claims of the LDS church and allows the reader to recognize the astonishing nature of those claims.

In answer to the question, “Are Mormons Christians,” Kerns final answer is gracious but firm: No, they are not. Throughout he exposes the core differences:

More could be said (and is said in the book!), but this is enough to show that there is no shared hope between Christians and Mormons. For those interested in the teaching of Mormonism, take up and read.