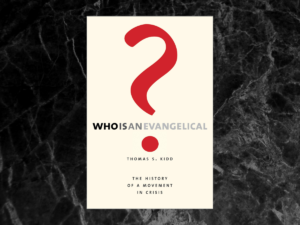 Thomas Kidd, a professor of Church History at Baylor University, is personally invested in the answer to the question posed in the title of his book. He is invested, because he calls himself an evangelical, and he fits in the historical stream of those who have borne that title.

The title is apt, for the book directly addresses the question of what defines an evangelical. To get there, however, Kidd walks through the history of the movement. This historical view is different from any I have read before, for Kidd looks at the question through a political lens.

Why the political lens? It is because in the national consciousness “evangelical” has come to mean something like “white, religious, republican.” Since this has become the almost default idea when the title is used, Kidd wants to trace how that conception came about. Thus, he accomplishes two things through the historical overview: 1) he shows how evangelicalism was transplanted from Europe and sprouted in American soil and 2) he shows how political involvement crept in through various channels and how evangelicals came to find hope in politics.

The chapter titles may help explain the trajectory of the book:

I won’t try to summarize the whole book here. Instead, I will highlight just a few things of note, whether things I learned, found interesting, or things that are central to the book:

In conclusion, I think Kidd has shown that the term evangelical has lost much of its doctrinal meaning (though I think it can still be meaningful in some places). And though he does not make this explicit, I think he has shown that the movement has done its best when it has focused on doing what it has been called to do (evangelize, emphasize personal lives of holiness) rather than when it has sought political power. On the other hand, I think the book lacks nuance between those who vote for what they believe are righteous ends and those who seek “political power.” It seems possible that the direction of society has forced all who hold to a biblical ethic into one of the parties and that their voting is not for political power, but for the sake of conscience. There are some loud voices within the movement who are desirous of political power, but that does not mean that the average evangelical is desirous of that power.