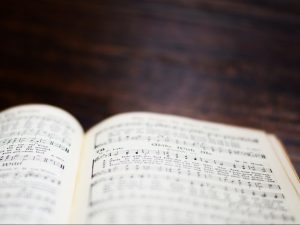 If you have not yet seen Dr. Mark Snoeberger’s recent article about the death of God in the death of Christ, I encourage you to consider it. Snoeberger’s argument there helps to refine and safeguard the way we think and discuss the death of Christ so that we are consistent with the biblical teaching about God and the person of Jesus Christ. These are important matters, and those who handle and teach God’s Word should be careful that we do not offer false ideas about the person and work of Jesus Christ.

Yet even after working through his argument, I am still comfortable with singing the kind of songs he highlights as potentially alarming (and will almost certainly continue to sing several of them in the church where I serve).

While I may not be able to claim the same level of intellectual prowess or dedicated study on this issue (and, thus, may regret setting forth my alternative opinion), I do want to offer four reasons why I do not entirely follow Snoeberger in his conclusion.

First, Snoeberger himself states three times that it is not inherently wrong to use statements like “God died”, since they can be understood in a way consistent with an orthodox understanding of Scripture and have been used regularly throughout church history (see pages 54, 57, 60). Thus, the decision as to whether or not to sing hymns with this language is a matter of wisdom, not adherence to biblical fidelity.

Second, I am still inclined to believe that the idea of forsaking points to a significant aspect of Christ’s suffering and atonement and that the union of the divine and human natures in Jesus plays a key role in that aspect. In order for God to redeem fallen humanity, he needed a second Adam that could fulfill the positive demands of the law and bear the penalty man deserved for violating it. Since no ordinary human could accomplish both of these tasks, the second person of the Godhead had to take upon himself humanity, becoming the God-man.

John Calvin speaks of Jesus’s “suffering in his soul the terrible torments of a condemned and forsaken man.” He discusses Jesus’s feeling “forsaken and estranged from God…as if God himself had plotted [his] ruin.” He states that Jesus “bore the weight of divine severity, since he was ‘stricken and afflicted’ by God’s hand, and experienced all the signs of a wrathful and avenging God.” [1]

Charles Hodge describes the experience of Jesus as the “hiding of his Father’s face….anxiety, fear, a sinking of the heart…the loss of the divine favour…the depressing and overwhelming darkness.”[2]

A. H. Strong believed that Jesus endured “the hiding of the countenance of God” and explicitly rejects the idea that the forsaking of God or hiding of his face was only subjective and not absolute.[3]

L. Berkhof states that Jesus suffered eternal death, resulting in “a feeling of Godforsakenness…[missing] the conscious comfort…and the sense of divine love.”[4]

Snoeberger is right to remind us that, as the eternal Son, Jesus was confident that God would not finally forsake him. But the narrative of the crucifixion (including his repeated prayers of anguish in the garden and the darkening of the sky) seems to point to his cry from Psalm 22:1 as highlighting the forsakenness/suffering of Jesus rather than his confidence in not ultimately being forsaken.

Third, I do not believe the authors of the songs mentioned are unknowingly veering into Moltmann’s understanding of the crucifixion. While he was emphasizing the importance of God’s identifying with suffering humanity, the hymns we use place a strong emphasis on the propitiatory nature of the atonement. They are not employing the language of God dying or Jesus being forsaken in order to encourage us to know that God is now able to relate to us, but that God is now able to forgive us because Jesus, the God-man, experienced the suffering and wrath that we deserved.

Additionally, the language of God hiding his face or of Jesus being forsaken/estranged has been in use for more than the last fifty years, as the citations above demonstrate. Thus, I’m not convinced that the authors of these hymns have in any way been influenced by Moltmann, even unwittingly. While I appreciate the call to be on guard against allowing error to slip in unnoticed (and share Snoeberger’s concern about the drift in evangelicalism away from the proclamation of the gospel and towards social justice), I do not believe this is the case here.

Finally, I think it is important to remember the nature of songs. We should not expect poetry to have the same precision and nuance as prose. If I am preaching, I would almost certainly qualify statements about God dying or Jesus being forsaken, so as to be certain that I am offering the necessary context to understand these concepts. But songs need not (and often should not) contain the same level of specificity. While we should certainly not sing things that are theologically false, we may sing things that are true even if potentially ambiguous. The reason is that poetry is not only designed to teach truth but also to excite the imagination and stir the affections.

When we consider the death of Christ, there are many aspects of mystery and wonder involved. How can Jesus be both God and man? How can God condemn his own Son? How can the God-man suffer and die? Why would the Son of God suffer in this way? The hymns we sing can help provoke holy wonder and contemplation of how we might begin to answer these questions that humans can never fully comprehend. In the language of the songs Snoeberger highlights, these truths should cause us to marvel at the cost of our salvation, to stop and consider the depth of God’s love for us, to wrestle with the idea of the sinless Son enduring punishment for sinful man, and recognize words can never adequately capture the suffering Christ endured and the glory we, in turn, receive.