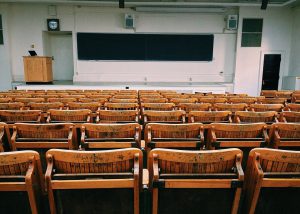 A few weeks ago, Dan Wallace wrote an article on the recent trend towards online theological education. I would like to summarize his points here, and then offer a few comments. You can read his entire post at this link (and I encourage you to do so).

The main point of Wallace’s article is that online theological education is useful but not best, and students pursuing ministry should seek the best. It should be noted that Wallace is not against online education; indeed, he notes that in some limited ways it may have an advantage over in-class education. Further, Wallace has recorded classes for consumption outside the classroom. Nevertheless, he believes that many students are sacrificing their ultimate good for temporary convenience.

To argue for his point, Wallace uses the example of Jesus. He notes that Jesus’ training of the disciples was intensely personal, messy, intentional, serendipitous, sacrificial, and communal. Most of these are self-explanatory. Two deserve further consideration. First, by serendipitous Wallace means that much of the teaching gained by the disciples was given in non-planned settings. He persuasively argues that online education has no natural venue for such teaching. Second, by sacrificial he refers both to Jesus, who gave Himself to the task of training, but also to the disciples who sacrificially gave themselves to discipleship.

In sum, Wallace argues that online education cannot match in-class education in regard to some of the most formative aspects of Jesus’ discipleship. He observes that many theological institutions (or individual professors) have refused online education, suffering financial loss, because they believe it is an inferior method of instruction. He concludes by giving some personal, anecdotal examples of how in-class education is superior in the ways outlined in the article.

Here I want to give a few of my thoughts concerning the article.

[1] Of course, this is a potential weakness in an on-campus classes as well, but I can observe when a student is not with me, and I can confront them. This is not possible in an online format.

[2] I cannot speak to the benefit of other fields. It may be that some are better done in an online environment. I speak only of online theological education.

[4] I understand that some theological schools have intentionally limited enrolment for this reason.