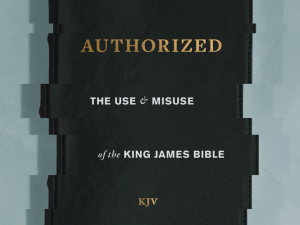 Mark Ward, a personal friend, has written a very helpful book on the King James Bible debate. Initially, you might think that the horse has been sufficiently beaten. Surely there is nothing new under the sun, and in terms of this debate, what can Ward offer that White, Carson, or Beacham & Bauder have not already offered?

In answer, I would argue that Ward approaches the conversation from a different angle than the other books in this market. He addresses himself to the common person in the pew, and he does so with a unique twist on an old argument.

Many have noted that the language of the KJB is no longer the language of English speaking people. Most KJB folks recognize this, and they suggest the use of a dictionary. Ward, however, highlights that a dictionary–even the OED–is not enough. This is because there are not only words in the KJB that have gone out of use (e.g., collop, bewray, and broid), but there are words which have changed meaning. These words Ward calls false friends, because they appear to be familiar, yet they are not. Such familiarity means that a reader will not know he must look at a dictionary. These words, through no fault of the translators, deceive modern readers into believing the Bible says something other than it says. This is serious. If we believe the Bible is the Word of God, then how significant are these false friends? Ward thinks they are quite significant, and I agree.

Now you may be thinking, “only non-educated KJB readers would fall prey to these false friends.” Or, you may say, “I agree there may be a couple of these, but not many.” Ward shows that both are false. In reference to the first, he has put together a web page to quiz people concerning whether they accurately understand the KJB. I encourage you to take the quiz. As for the second concern, he makes a hefty list in the book of 25 false friends, which he indicates is not exhaustive.

Many might think Ward’s book is unnecessary, but I think he has identified a unique spin on an old argument that makes his book compelling.

*A longer review of this book will be published, Lord willing, in our upcoming journal.