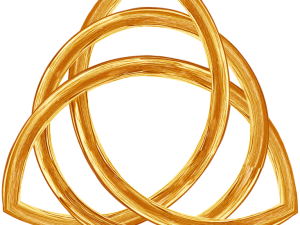 When we exegete a passage, three poles must always be in mind. First, there is a historical dimension to every text. This includes not only the historical facts a text may claim, but also includes the historical context under which the entire text is to be understood. Second, there is a theological dimension, which speaks not only to the specific theological truths presented, but also considers the contribution a particular text makes to the broad theological grid of the Scriptures. Finally, there is the literary dimension, which includes genre as well as other literary techniques. This hermeneutical triad is taught by Rhadu Gheorghita at Midwestern Baptist Theological Seminary, and it is developed in print by Andreas Köstenberger in an aptly named book, Invitation to Biblical Interpretation: Exploring the Hermeneutical Triad of History, Literature, and Theology.

While recently listening to a presentation on the importance of each element of the triad, I was drawn to a consideration of what happens when we neglect a particular leg of the triad. The following is an attempted identification of what type of reader is presented by each omission:

Let’s say we ignore the theological element of the text. If so, we read the text as an unbeliever reads the text. Across the country there are many who would claim that the Bible is one of the greatest masterpieces of literature (highlighting its literary elements), and they would take seriously its historical claims, while outright rejecting such claims. They may see some consistency in message, but they find no divine author superintending the text or producing a harmonious theological message.

Those who deny the historical element of the text can be considered liberal in the religious sense of that word. Clearly, they do not deny the historical situatedness of the text; rather, they deny the historical truthfulness of the text. Some may be so sophisticated to argue from a literary or theological standpoint that the text never really meant to speak of historical truth in the way conservatives think it does (e.g., Bultmann’s Demythologizing or Barth’s God’s Time vs our time). Regardless of how they get there, the similarity among liberals is a denial of the text’s historic veracity while maintaining a deep appreciation for the theological and literary aspects of Scripture. Of course, conservatives would argue that without historical moorings, theological propositions are groundless. This is clearly demonstrated in the variety of positions maintained within liberalism.

In many ways, this is the least problematic of the deficiencies in the triad. Nevertheless, the results of missing the literary aspects of Scripture can be quite problematic. Of course, everyone who reads the Bible in English translation misses some of the beauty of the original text. Those who have mastered Hebrew will argue that one has never experienced the book of Job appropriately as a literary text unless he has done so in Hebrew (the majority of the text is a poem). Nevertheless, our focus here is not merely on beauty, but is on the literary structures and genres with which Scripture speaks. I am convinced that if there is a place for further development in our hermeneutics it does not reside in the theological or historical side, but rather resides within the literary side. Modern writers write for readers in a literary world, but ancient writers wrote for listeners in an auditory world.

How does that impact the way Scripture is recorded? One key element is the frequent use of inclusions in a text, which signal that a topic has begun and then ended. For instance, in the Sermon on the Mount, Jesus’ first beatitude (5:3) promises the blessing of inheriting the kingdom of heaven, and his last beatitude does the same (5:10). The result of recognizing this literary element is not merely to see that Jesus has ended the beatitude section (which is obvious for other reasons), but is also to indicate that both the characteristics praised as well as the rewards received are of one cloth. That is, Jesus is not suggesting that people who are meek will inherit the earth, while those who are persecuted will have the kingdom of heaven. Instead, it is those who have all of the characteristics (are meek, merciful, persecuted, etc.) that will inherit all of the promises.

Another frequently used organizational pattern is chiasm, where the author intentionally structures the presentation of material to highlight a central theme or topic. Brad McCoy in his discussion of the topic (click link for more info), highlights a simple chiasm and how it works in 1 John 3:9: 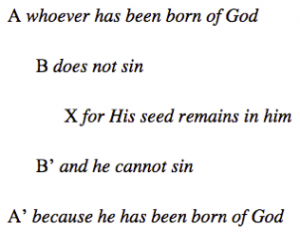 The middle element is usually the most important point of the structure, and is placed there purposefully. Greek and Hebrew did not have italics or bold, and the written language seems to be dependent on oral development to a high degree. Thus, things like Chiasm, which appear quite odd to us, are normal aspects of literature in the Scriptures.

I have focused on this last element, because I think we are aware of the danger or reading like an unbeliever or reading like a liberal. What we most likely will do, however, is read as uninformed people. This may be part of the reason why Köstenberger, in his book on the hermeneutical triad, spends over 500 pages on the literary aspect. How long has it been since you have read a book focusing on the literary dimension of Scripture? It may not be a Copernican revolution in your Bible reading, but it may help you understand better what the Biblical writers—and thus the Holy Spirit—was seeking to communicate to us.