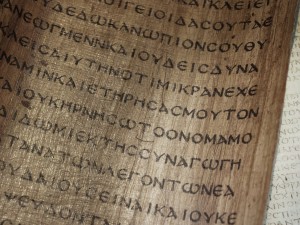 I have recently been interested in the relationship between the Septuagint (LXX, the Greek translation of the Hebrew Old Testament) and the New Testament. Most commentators recognize that NT authors cite from the LXX more frequently than from the Hebrew. I believe the implications of this fact are significant for the way we view translations and the translation task.

First, how does the use of the LXX relates to the doctrine of inspiration? Augustine along with many other church fathers believed the LXX was itself inspired, calling the translators prophets. He argued that both the Hebrew (original) and the Greek (translation) “should be employed as authoritative, since both are one, and both are inspired by God.”[1] Jerome sought to correct this view by returning to the Hebrew rather than translating from the LXX, which was the practice in his day.[2] I find this historical point interesting, since some in the King James Only Movement have also argued for the inspiration of a semi-modern translation. Perhaps this reflex is reflective of our deep appreciation for the text as it has been given to us along with a misunderstood application of the doctrine of preservation. In the end, there is nothing new under the sun, for Jerome recognized the same error in his day that we presently see in the King James Only Movement.

Second, I am interested in the way the LXX impacts our view of modern translations. As anyone who has done translation in the past knows, translation is always interpretive. Because no word in one language relates perfectly to another, no translation can be a perfect representative of the original. Nevertheless, Paul—who certainly knew Hebrew and Greek—cites from both the Hebrew text as well as the LXX. In other words, even when he had access to the Hebrew, he chose to use a translation. The same, I believe, can be said of Jesus. He knew Hebrew, yet He used the LXX for his quotations in some circumstances.[3] Why did they do so? I think Paul did so because he was the apostle to the Gentiles. Some of these Gentiles were God-fearers, who heard the Old Testament proclaimed in the synagogue in Greek. Thus, Paul wanted the Bible to be in their language. Thus, we find divine justification for Bible translation.

Third, as I have worked through the book of Hebrews, I have found that the author of Hebrews sometimes updates the language of his citations from the LXX to match modern usage (e.g., Heb 3:7-11). The LXX had been written hundreds of years before the New Testament and language had shifted during that time. The point is, then, a divinely inspired author updated the language of his translation to make it more understandable to his audience. Here we find divine justification for updating the language of a translation.[4]

Finally, New Testament authors used the LXX even when it differed from the Hebrew. It would be too complicated in a blog post to discuss the various explanations for these occurrences. As a general overview, however, we can say that there are times where the LXX offers a relatively free (dynamic) translation, which borders on interpretive explanation. When such a translation is found appropriate by the NT author (and thus the Spirit!), the New Testament authors embrace the interpretation, affirming that the LXX translator/interpreter got it right. More important are those times when the LXX appears to get it wrong. For instance, while 1 Peter almost always quotes from the LXX, in 2:6 his translation looks nothing like the Septuagint rendering. It appears that Peter (and the early church) recognized the failure of the Greek translation and chose to cite from the Hebrew (or chose to cite a better Greek translation).[6] Thus, there is divine justification for using a translation even when we believe the interpretation got it wrong in some places (though we should obviously not depend on the translation in problematic areas).

Certainly, more could be said about the justification provided by the Septuagint for modern translations, and I encourage you to add your thoughts in the comments below.

[2] Jerome notes the distinction between prophet and translator: “it is one thing to be a prophet, another to be a translator. The former through the Spirit, foretells things to come; the latter must use his learning and facility in speech to translate what he understands.” Jerome, “The Prologue to Genesis,” 3:516.

[3] While one might argue that the Gospel writers contextualized Jesus’ teaching and thus modified Jesus’ Hebrew citations to LXX citations, this goes against the evidence. Longenecker has shown that Matthew prefers to cite from the Hebrew, but when he records Jesus’ citations, they come from the LXX. The most logical explanation is that Matthew was seeking to be faithful to the teaching of Jesus, using the LXX where Jesus used the LXX. (Richard N. Longenecker, Biblical Exegesis in the Apostolic Period, Rev. ed. (Grand Rapids, MI: Wm. B. Eerdmans Publishing Co., 1999), 26.)

[4] Thus, I am thankful that the ESV committee reversed the decision to stop updating the text of the ESV.

[6] Our understanding of the Greek texts in the New Testament period is incomplete, but it is evident that there were some Greek versions, which were offshoots of the original LXX but had been reworked to be more faithful to the Hebrew text. Peter may have had access to a translation like this, or he could have translated from the Hebrew himself.