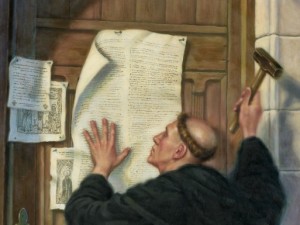 On this day 499 years ago, a monk named Martin Luther (1483–1546) approached a church door in Wittenberg, Germany and posted a list of topics for academic debate at the local university. With this relatively innocuous act Luther started a movement that developed into the Protestant Reformation.

That list of topics which Luther posted on October 31, 1517 was formally titled Disputation on the Power and Efficacy of Indulgences, but it has become more popularly known as his 95 Theses. If you’ve never taken the time to read Luther’s 95 Theses, today would be a great day to do so. They can be read online in just a couple of minutes. They’re also included in this free Kindle collection of some of Luther’s writings. Luther wrote a lot, and much of it is very interesting and still quite relevant.

So this evening, go ahead and hand out some candy to kids dressed-up as super heroes, but also consider taking a few minutes to remember a brave German monk who dared to point out that righteousness can’t be bought or sold but rather is received by faith in Christ alone.