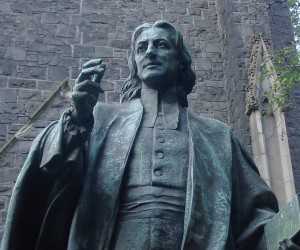 Just six months before he died, John Wesley (1703–1791) wrote to a preacher named Robert Carr Brackenbury (1752–1818). In that letter Wesley revealed why he believed God had led him establish the Methodists. He wrote, “…with regard to full sanctification. This doctrine is the grand depositum which God has lodged with the people called Methodists; and for the sake of propagating this chiefly He appears to have raised us up” (letter to Robert Carr Brackenbury, 15 Sept 1790).

Looking back over his long career Wesley tied the rise of the Methodists to God’s intention that the doctrine of entire sanctification be taught to the world. What is entire sanctification? Glad you asked. One of the workshops at the E3 Pastors Conference this week is titled “John Wesley and the Decline of Confessional Sanctification.” We’ll try to answer that question and others in the workshop.