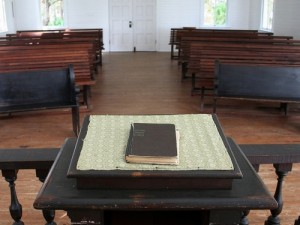 In the early 1800s the church in America faced a number of challenges. Intermittent revivals of religion in the previous decades had fueled rapid church growth without a corresponding supply of godly, qualified ministers. The vastly expanding western frontier called for missionaries, as the pioneer settlers often were unevangelized and disconnected from established churches. Young men desiring to enter the pastorate typically lacked adequate resources for training and commonly had to settle for self-tutelage or the mentorship of a single local pastor. As one church leader lamented, “The deficiency of preachers is great. Our vacancies are numerous, and often continue for years unsupplied, by which means [the churches] are broken up or destroyed” (quoted in J. W. Alexander, The Life of Archibald Alexander [reprint of 1854 ed., Harrisonburg, VA: Sprinkle Publications, 1991], 314).

In response to these challenges the Presbyterian church devised a plan. Under the belief that “no church . . . which neglects the proper education of her ministers, can be considered as faithful, either to her own most vital interests, or to the honour of her divine Head and Lord,” the church established a committee tasked with investigating the best means for establishing a theological school. The result was the founding of Princeton Theological Seminary in 1812. Archibald Alexander (1772–1851) was elected its first professor, charged with training ministerial candidates in all branches of the theological disciplines. Students would first meet in Alexander’s home, joining the Alexanders for meals and family worship.

At Dr. Alexander’s inauguration as professor on August 12, 1812, the keynote speaker was Dr. Samuel Miller (1769–1850), a prominent New York City pastor who would later join Alexander as the second professor. Miller preached from the text of 2 Timothy 2:2, “And the things which thou hast heard of me, among many witnesses, the same commit thou to faithful men, who shall be able to teach others also.” His theme was the duty of the church to produce and sustain an able and faithful ministry. He developed this theme under four major headings:

Miller then exhorted those leaders responsible for the seminary with the sacred duty incumbent upon them:

When I cast an eye down the ages of eternity, and think how important is the salvation of a single soul; when I recollect how important, of course, the office of a minister of the Gospel, who may be the happy instrument of saving many hundreds or thousands of souls; and when I remember how many and how momentous are the relations, which a Seminary intended solely for the training up ministers, bears to all the interests of men, in the life that now is, and especially in that which is to come; I feel as if the task of conducting such a Seminary, had an awfulness of responsibility connected with it, which is enough to make us tremble! O my fathers and brethren! Let it never be said of us, on which this task has fallen, that we take more pains to make polite scholars, eloquent orators, or men of mere learning than to form able and faithful ministers of the New Testament. . . . The eyes of the church are upon us. The eyes of angels, and, above all, the eyes of the King of Zion, are upon us. May we have the grace to be faithful! (The Life of Archibald Alexander, 347–48, emphasis his).

Finally, Miller implored the young men desiring to enter the ministry to consider carefully their calling:

Behold, my young friends, the high character at which you are called to aim! You have come hither, not that you may prepare to shine; not that you may prepare to amuse men by philosophic discussion, or to astonish them by flights of artificial eloquence; but that, by the blessing of God, upon the use of means, you may become faithful men, who shall be able to teach others also; that you may become wise in winning souls to Christ; that you may prepare to go forth, defending and proclaiming the messages of grace to guilty men, and persuading them to be reconciled to God. Seek to excel. It is noble to excel. But let it be always for the edifying of the church. THIS, my young friends, THIS is the object which is recommended to your sacred emulation. We charge you, in the presence of God, to let all your studies and aims be directed to this grand object. Seek, with humble, persevering, prayerful diligence, to be such ministers as you have heard described; and you will neither disappoint yourselves nor the Church of Christ. Seek to be any thing else, and you will be a grief and curse to both (ibid., 348–49,  emphasis his).

Two hundred years removed from the founding of Princeton, Samuel Miller’s impassioned cries ring true today. The sacred task has fallen to us. Let us not be negligent in using all our means to nourish an able and faithful ministry to the glory of God for now and the ages to come!