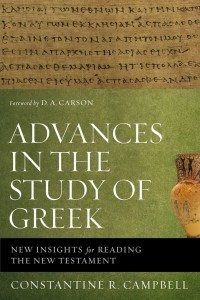 (The following is my short review of the book. For a fuller treatment see the helpful review in our recent journal by Timothy A. Hughes)

I just finished reading Advances in the Study of Greek by Constantine Campbell, a relatively recent work on the state of New Testament Greek (NTG) scholarship (2015). In the introduction, he notes that he never intended to write a book on the topic, but his students frequently asked that the material presented in his Advanced Greek class be available to a larger audience. Thus, readers have an opportunity to sit in Campbell’s classroom, listening to the Greek master.

Of course, most will know Campbell from his work on aspect, and unsurprisingly that is one of the meatiest chapters in the work. Surprisingly, however, the chapter on Levinsohn’s Runge’s Discourse Analysis is of the same length, and we will make some comments on that below.

The first chapter helpfully orientates students to the past history of Greek studies, whether NTG or even more widely. Clearly, such an introduction could have been the length of the entire volume, so Campbell had to show much selectivity. On the whole, the introduction both orientates readers to the big names and resources as well as historically situates the reader at the present time in history.

The second chapter attempts to open NTG studies to the broader field of linguistic theories. In other words, Campbell addresses how wider discussions of language interact with the study of the NT. There are few entirely new insights presented here that impact NT studies; instead, Campbell argues that what has been known for quite some time has still not fully been integrated NT studies (69).

The third chapter on lexicography and lexical semantics is the least “advanced” topic in the work. That is, almost everything said in the chapter has been said for the last few decades. Nevertheless, the elements present helpfully summarize the dangers involved with words—e.g., word studies, problems with lexicons, etymology, etc.

Deponency and the Middle Voice is the topic of the fourth chapter, and it is enlightening. In recent years there has been a push against the concept of deponency, and this chapter highlights the historical roots both of the idea as well as the opposition to it. In the end, Campbell does not seek to push a particular perspective on the issues within the book, but he does note that there is a scholarly consensus against deponency, though he highlights there is no consensus on the way forward. This is an area where present scholarship is currently engaged.

Of course verbal aspect, aktionsart, and tense are discussed, and they are presented in chapter five. Here is where Campbell takes pains to remain objective, though his attempt is at points futile. The presentation does skew towards his tenseless, two aspect view, but he nevertheless presents the other position fairly. Overall, I found this chapter helpful in orienting students to where historical scholarship has been and where it has come on this topic. But since the discussion covers only around 30 pages, readers must go beyond this work to find more definitive treatments. Thankfully, Campbell provides bibliographies at the end of each chapter, including this one.

Chapter 6 focuses on the concepts of idiolect (a particular speaker’s way of writing), genre (the broad classification of a type of literature), and register (a more refined definition of what the author is doing within a particular genre). The purpose of the chapter is to show how individual authors use various grammatical features within their writing to communicate. The ideas presented in this chapter are not altogether new, but they do show how a student can analyze a text within the broad confines of genre to identify how the individual author communicates.

Discourse analysis is the topic of chapters seven and eight. The former highlights the contribution of M. A. K. Halliday while also giving a broad discussion of the history of the topic. The latter chapter focuses on the work of Stephen Levinsohn and Steven Runge. In my estimation, these chapters are the most difficult section of the book for students to grasp. Discourse analysis is necessarily complicated, and the presentation of three models appears overwhelming, especially since there is little attention given to examples.

The final two chapters are more practical in nature, with the ninth speaking of pronunciation and the tenth with teaching methodology. As for pronunciation, Campbell details the current discussion on whether Erasmian pronunciation should be abandoned in light of the research that suggests Koine Greek was probably spoken similarly to Modern Greek. And while he tips his hat to the idea that Erasmian Greek may be more teachable (because it distinguishes more vowel sounds), he believes we should move to a Modern Greek pronunciation. The final chapter details the role of technology and immersion in the study of Greek, and while neither are comprehensive, they do spark the interest of the reader to pursue the topics further.

On the whole, this is a valuable work, allowing students to survey the field of Modern New Testament Greek studies. Interested students will certainly have to move beyond the essays of the book into the works noted in the bibliography, but considering the purpose of the work, I believe Campbell would be thrilled if his work were forgotten by the student who uses it as a stepping stone to further study.