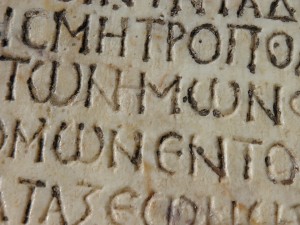 A local pastor recently asked me to recommend a reliable Greek guide for working through a New Testament text. He was planning to preach through the text, and while he had plenty of commentaries, even commentaries based on the Greek text, he was looking for something that engaged the Greek more directly. I was thrilled not only that a pastor wanted to stay engaged with the Greek language, but also because I could recommend more than one resource! Indeed, the pastor’s question led me to look closer at resources designed to aid readers in engaging directly with the Greek text.

I am aware of four modern series of Greek guides. First, the Exegetical Summary (ES) series, produced by the Summer Institute of Linguistics, began in 1989. Only two books are yet to be completed for the New Testament (John and Acts). Second, the Exegetical Guide to the Greek New Testament (EGGNT) produced its first volume in 1991, but the series was recast under a different publisher in 2010. Since then, nine additional volumes have appeared. Third, the Baylor Handbook on the Greek New Testament (BHGNT) series started in 2003. And while it started slow, the series has now covered twenty New Testament works. Finally, Herbert Bateman IV has edited a series, Translating Clause by Clause (TCC), which began in 2013, and has covered eight New Testament books to date.

I am currently writing a review of these guides. I plan to compare them, show the strengths and weaknesses of each, and highlight who would best benefit from each. I would be interested in hearing from our readers—have you engaged with these works? If so, which one(s), and what did you find helpful?