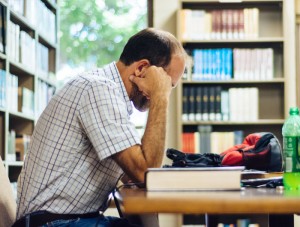 Should the chief role of a seminary be the training of scholars or pastors? In recent years there has been much said about the Pastor-Scholar, a breed of theological prodigies capable of handling two full time jobs. While some may be able to maintain such balance, most have to determine the calling God has for them and pursue it with full attention. If so, what is the role of the seminary?

Some scholars skip the premier seminary degree (the Master of Divinity), choosing to take a MA and then the doctorate. DBTS has held that this is a shortcut, preventing the student from the full range of courses needed to prepare one for ministry. If the student responds, I don’t plan to go into ministry, I plan to be a scholar, then we need to continue the conversation. What is the purpose of a scholar?

Recently I came across an author who offhandedly commented that the role of the professor/scholar[1] is to be a servant to the church by primarily serving the pastors. Of course, this seems obvious on one level. Since many ministers are trained in seminaries, professors serve them in this educational capacity. The quote, however, suggested more. The whole purpose of scholarship—the work not primarily done in the classroom but in the office—is to be done in the service of pastors who serve on the front lines of ministry service. In other words, the scholar should continually ask himself, How does this benefit pastors and the church?[2]

If this is accurate—and I think it is—then skipping the MDiv in order to get to the doctorate quicker is not a wise plan. True, the student may get the diploma faster, but he may not be adequately equipped to do the task he is ultimately aiming to do. So, the scholar needs the MDIv, and if so, we are back to the original question, what is the chief role of the seminary?

I would argue that the seminary should be a place that develops the student’s intellectual skills with an aim towards pastoral ministry. While many pastors will not be scholars, they must be competent in the basic skills necessary for scholarship (reading critically, communicating cogently, etc.). On the other hand, scholars may never become pastors, but they must be aware of the needs of those for whom they ultimately serve.

A.T. Robertson, the chief Greek scholar of his day, delivered an address to Southern Seminary in 1890 titled, Preaching and Scholarship. In that address, he found the appropriate balance DBTS strives to replicate:[3]

The German idea is to make scholars first and preachers incidentally. But ours is to make preachers, and scholars only as a means to that end. We have small need in the pulpit for men that can talk learnedly and obscurely about the tendencies of thought and the trend of philosophy, but do not know how to preach Christ and him crucified. The most essential thing to-day is not to know what German scholars think of the Bible, but to be able to tell men what the Bible says about themselves. And if our system of theological training fails to make preachers, it falls short of the object for which it was established. But if it does meet the object of its creation, it calls for hearty sympathy and support. . . . But my plea is for scholarship that helps men to preach. For after all, the great need of the world is the preaching of the gospel, not saying off a sermon, but preaching that stirs sinful hearts to repentance and godliness.

In conclusion, if a seminary is predominantly interested in training scholars, it may be a sign that it has wandered from its foundational purpose—to aid the church by impacting future and current pastors.

[1] I am not suggesting here that all professors are scholars or that all scholars are professors. Most professors, however, strive to also be a scholar in their own field.

[2] One might conclude that this necessarily excludes esoteric scholarship—e.g., Aquinas’s distinction between essence and existence. I would argue, however, that even that topic has its value to the church. No pastor would preach this to his congregation (or at least, I hope not!), but the implications of such a distinction could influence one’s view of God and therefore impact a pastor’s overall ministry. Not every pastor will directly be involved in such discussions, but many will be influenced by trickle down from the broader conversation.

[3] I came across this quote as I was reading the tribute in Going Deeper with New Testament Greek: An Intermediate Study of the Grammar and Syntax of the New Testament to A. T. Robinson. Jeff George
Commented On 08 Aug 2022
John Sartelle has a great book on infant baptism that is helpful in explaining infant bapt...

Tim Miller
Commented On 29 Jul 2022
The papers are generally not available until or if the presenter publishes it. Of course, ...