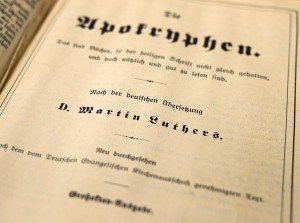 I have been reading quite a bit about John’s Gospel recently. My reading has spanned the spectrum from conservatives to fairly progressive scholars (sometimes called “critical” scholars, but since a conservative can be critical in his engagement with Scripture, I have chosen to describe them as progressive). As a conservative, I naturally feel at home with other conservative scholars. They view the text the way I do—even if I may not agree on every element of interpretation. Reading progressives is not always an enjoyable experience. Their perspective on the text is foreign. Where a conservative would seek to harmonize two biblical accounts, some progressives appear to believe being “critical” requires finding a discordant witness between the two—especially if it is Paul against another New Testament writer.

The result of reading such progressives often leads professors towards an apologetic stance in teaching. Our students—especially if they are relatively inexperienced in scholarship—frequently do not even approach the text as progressives approach it, and therefore find our apologetic approach strange. I recently had such an experience. Readers of this blog may have noticed that DBTS asked me to teach an extension course at First Baptist Church in Wixom. We had a good turnout for the class, and while some of the students were there to take the course for credit, others (primarily church members) simply desired to learn more about the Bible. To my knowledge this latter crowd has never read anything by a progressive scholar. They were, therefore, sometimes puzzled by the arguments posed against conservative positions—e.g., Paul’s authorship of some of his works or the historical reliability of Luke’s account. For them, it is hard to imagine someone approaching the Scripture from an entirely different vantage point than they approach Scripture.

For these students, I believe a seminary class is a wonderful time for them to be exposed to such arguments. The popularity of Bart Ehrman, the first and only scholar to write a best-selling book on textual criticism, suggests that perhaps pastors should address some of these topics as well. Nevertheless, that is for a different article. Here I simply want to note the difficulty of describing the “scholarly world” of New Testament literature to the regular church layperson. The other day I stumbled upon one such attempt. The author, Adrian Howell North Green-Armytage, wrote a book titled, John Who Saw: A Layman’s Essay on the Authorship of the Fourth Gospel. His description of this scholarly world in 1951 fits quite well in our modern day:

There is a world—I do not say a world in which all scholars live but one at any rate into which all of them sometimes stray, and which some of them seem permanently to inhabit—which is not the world in which I live. In my world, if The Times and The Telegraph both tell one story in somewhat different terms, nobody concludes that one of them must have copied the other, nor that the variations in the story have some esoteric significance. But in that world of which I am speaking this would be taken for granted. There, no story is ever derived from the facts but always from somebody else’s version of the same story. …In my world, almost every book, except some of those produced by Government departments, is written by one author. In that world almost every book is produced by a committee, and some of them by a whole series of committees. In my world, if I read that Mr. Churchill, in 1935, said that Europe was heading for a disastrous war, I applaud his foresight. In that world no prophecy, however vaguely worded, is ever made except after the event.  In my world we say, ‘The first world-war took place in 1914–1918. In that world they say, ‘The world-war narrative took shape in the third decade of the twentieth century’. In my world men and women live for a considerable time—seventy, eighty, even a hundred years—and they are equipped with a thing called memory. In that world (it would appear) they come into being, write a book, and forthwith perish, all in a flash, and it is noted of them with astonishment that they ‘preserve traces of a primitive tradition’ about things which happened well within their own adult lifetime.

Balance is required, then. I do not desire to spend all my time as an educator interacting with this “world” of broader scholarship, developing its foundations and conclusions. There are riches within the biblical text reserved only for those who read it with trust and humility. Nevertheless, I do not want my students to be ignorant of this “world” either. If you are a theological educator, I would love to hear your advice on maintaining a helpful balance.

[1] I would argue the opposite position as well, i.e., progressives could take time to learn of the conservative’s foundations before critiquing the positions that derive from such foundations.