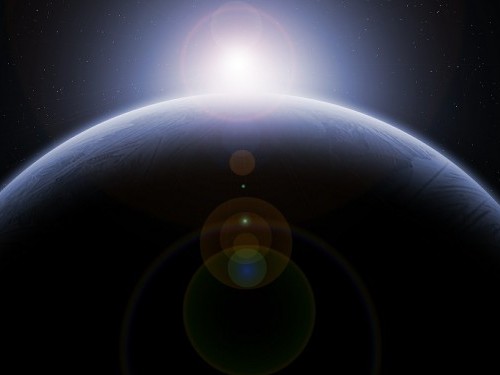 Are science and religion/faith incompatible? The leading lights of the atheism revolution certainly believe they are:

But before answering whether there is a conflict, it is critical to define the terms. What is meant by science? Consider one definition by Dictionary.com: “the systematic knowledge of the physical or material world gained through observation and experimentation.” Notice how this definition necessarily excludes anything non-natural or non-material. According to the Christian faith, God is not material and is non-natural. That is, God is a Supernatural Being. If science limits itself to the material world, then there can be no conflict between science and faith/religion (i.e., religions of a theistic persuasion) since science does not speak to that type of religion/faith at all. Edgar Andrews points out the problem of defining science to exclude the supernatural:

“By the same logic, if you define birds as ‘feathered creatures that fly’, there’s no such thing as an ostrich.  It’s fairly obvious in this example whose head is in the sand.  The correct conclusion, of course, is not that ostriches are mythical but that (on your restrictive definition of ‘bird’) they are not birds.  In the same way, to define science as the study of the material universe simply prohibits science from making statements about a non-material entity like God.”

Many people, however, properly observe that while science focuses on the natural world, its conclusions may point beyond the natural world. In fact, it appears that the atheists noted above seek not only to exclude God from science by limiting its purview to the natural world, but they also will argue that science suggests there is no need for anything beyond the natural world. In this way, science can actually speak to faith/religion, for where/if science points beyond the natural world, it points to something greater than the natural world. Of course, this observation gets us close to the central issue. Atheists will often argue that creationists have faith in the “God of the gaps,” a situation in which God explains all the places that science has not yet understood. But the argument can be reversed—atheists have faith in science to give all the answers to yet mysterious phenomena. In this way, science replaces God as the gap filler, and an unbridled optimism concerning the future of the scientific enterprise guarantees the naturalistic answer to all of the difficult issues of today (e.g., the origins of morality, the origins of consciousness, the transition from “nothing” to something).

Because naturalistic scientists (i.e., those who believe only natural, non-spiritual entities exist) frequently use the results of science to argue for the non-necessity of a spiritual agent, it is proper to allow creation scientists to also use the results of science in order to argue for the necessity of a supernatural entity. To do otherwise is to prejudice the entire enterprise from the outset.

What about the definition of religion? There is no clear, agreed upon definition of religion. Some definitions include (a) supernatural being(s), but there are many religions that are non-theistic (some forms of liberal Christianity, Hinduism, and Jainism). One of Webster’s definitions appears to be wide enough to embrace what is generally called religion: “a cause, principle, or system of beliefs held to with ardor and faith.” According to this definition, Christianity is a religion, but so is naturalism. Naturalism is, to borrow a phrase from Carl Sagan, the view that nature (the cosmos) is all that was, is, and ever will be. This foundational metaphysical belief lays the structure for building an entire worldview, including personal ethics. Edward Feser, in his book critiquing the New Atheism, cites various naturalistic/materialistic scientists who use language suggesting that their position is consistent with religious ideology:

Tyler Burge opines that “materialism is not established, or even clearly supported, by science” and that its hold over his peers is analogous to that of a “political or religious ideology”; John Searle tells us that “materialism is the religion of our time,” that “like more traditional religions, it is accepted without question and . . . provides the framework within which other questions can be posed, addressed, and answered,” and that “materialists are convinced, with a quasi-religious faith, that their view must be right”; and William Lycan admits, in what he himself calls ”an uncharacteristic exercise in intellectual honesty,” that the arguments for materialism are no better than the arguments against it, that his “own faith in materialism is based on science-worship,” and that “we also always hold our opponents to higher standards of argumentation than we obey ourselves.”[1]

That naturalism/materialism is the “religion of our time” explains the significant conflict between Christian scientists and naturalistic scientists. It is not that the latter are objective while the former are not; rather, both come to the evidence with presuppositions that determine the conclusions that can be reached by the evidence. Richard Lewontin provides a helpful expression of this point:

Our willingness to accept scientific claims that are against common sense is the key to an understanding of the real struggle between science and the supernatural. We take the side of science in spite of the patent absurdity of some of its constructs, in spite of its failure to fulfill many of its extravagant promises of health and life, in spite of the tolerance of the scientific community for unsubstantiated just-so stories, because we have a prior commitment, a commitment to materialism. It is not that the methods and institutions of science somehow compel us to accept a material explanation of the phenomenal world, but, on the contrary, that we are forced by our a priori adherence to material causes to create an apparatus of investigation and a set of concepts that produce material explanations, no matter how counter-intuitive, no matter how mystifying to the uninitiated. Moreover, that materialism is absolute, for we cannot allow a Divine Foot in the door. The eminent Kant scholar Lewis Beck used to say that anyone who could believe in God could believe in anything. To appeal to an omnipotent deity is to allow that at any moment the regularities of nature may be ruptured, that miracles may happen.[2]

Lewontin clearly reveals the fundamental nature of the issue. Materialism/Naturalism is absolute—there can be no alternative. From this naturalistic starting point, all questions are posed and answered. This type of naturalism provides an entire worldview from which one operates.