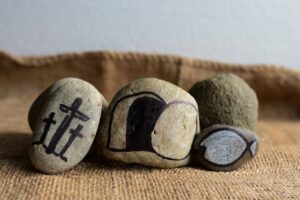 The death and Resurrection of Christ together represent the pivotal event of the Christian Scriptures. In these two paired incidents are contained the seeds from which the whole Christian Gospel sprouts, and in them are seated the great Christian hope that

I am not my own, but belong with body and soul, both in life and in death, to my faithful Saviour Jesus Christ. He has fully paid for all my sins with his precious blood, and has set me free from all the power of the devil. He also preserves me in such a way that without the will of my heavenly Father not a hair can fall from my head; indeed, all things must work together for my salvation. Therefore, by his Holy Spirit he also assures me of eternal life and makes me heartily willing and ready from now on to live for him (Heidelberg Catechism Q/A #1).

Neither the death nor the Resurrection of Christ should be regarded as “more important” than the other. My point in this blog post is not to pit these two glorious aspects of the work of Christ against each other; rather my goal is to suggest that the latter needs to be accorded greater emphasis in our understanding of the Gospel.

If we were to ask a hundred Christians why the Resurrection is important, we’d likely get a hundred answers. This is not surprising, because the significance of the Resurrection is manifold. What does surprise, perhaps, is the relative incidence of common answers. I recently asked the question of Google in a variety of ways, and assembled a substantial sample set of answers. The answers were intriguing. Among the many reasons given, the overwhelming “winner” was that

I was surprised, but perhaps I should not have been. Most of the evangelistic presentations I have heard in my life end with the death of Christ on the cross. It’s not that they deny the Resurrection; they just stop before they get there. The huge concern is justification, principally the removal of the guilt that stands between me and my entry into heaven—an expiation that Jesus secured in his atoning crosswork. There was more to the Christian message, we all knew, but this was where we paused for a willing listener’s profession of faith. The Resurrection was important, but I never knew exactly why—it didn’t seem to add anything to the Gospel presentation except emphasis. The Resurrection was basically an exclamation point on justification. It confirmed that the Father had accepted Christ’s bid to offer up a substitutionary atonement. The plan had “worked,” and now justification was now available.

This function of the Resurrection is a biblically demonstrable one, inferentially in Paul’s announcement that “if Christ has not been raised…you are still in your sins” (1 Cor 15:17) and more directly in his statement that Christ was “raised for our justification” (Rom 4:25). In short, this is a good answer to the question of the importance of the Resurrection—just not the principal one. So, back to our survey we go to find two other answers that made strong showings:

These reasons are also biblically defensible, and more directly so. As is the case with nearly all biblical miracles, the Resurrection confirmed the identity and message of the subject under review: Christ was “declared to be the Son of God by his resurrection from the dead” (Rom 1:4). Likewise, the resurrection stands as an eschatological harbinger of our experience beyond the grave (1 Cor 15:20ff; 2 Cor 4:14; etc.).

The rest of reasons offered in my “survey” were legion, but no others came close to competing with these top three reasons. I was surprised at this, not because these answers are wrong (they’re all solid, orthodox answers), but because the most dominant Scriptural reason for the Resurrection didn’t even medal. A survey of NT data suggests that the principal theological reason for the Resurrection is to make possible the experimental benefit of union with Christ, viz., our regeneration and sanctification. We have been united with Christ in his Resurrection so that we may walk in newness of life:

1 Peter 1:3: In his great mercy he has given us new birth into a living hope through the resurrection of Jesus Christ from the dead.

Romans 6:4–14: Just as Christ was raised from the dead through the glory of the Father, we too may live a new life…. Since Christ was raised from the dead, he cannot die again; death no longer has mastery over him. The death he died, he died to sin once for all; but the life he lives, he lives to God. In the same way, count yourselves dead to sin but alive to God in Christ Jesus and do not let sin reign in your mortal body so that you obey its evil desires.

Colossians 3:1ff: Since you have been raised with Christ, set your hearts on things above, where Christ is seated at the right hand of God. Set your minds on things above, not on earthly things. For you died, and your life is now hidden with Christ in God.…. Put to death, therefore, whatever belongs to your earthly nature.

The Reformers’ well-worn duplex beneficium includes firstly a forensic/legal class of benefits (chiefly our justification), and secondly an experimental class of benefits (chiefly new birth and its outgrowth in sanctification). In the latter, we rise in union with Christ as new creatures fitted for progress in good works. This is the “other half” of the Christian Gospel, and one woefully neglected in evangelical life.

Why this neglect? Well, many reasons come to mind, but my cynical self observes that sales presentations tend to focus on the benefits of a product rather than the new responsibility that attends it. The cross draws our attention to the former; the Resurrection to the latter, urging the new believer to pick up new weapons in his fight against sin, to pursue holiness, and to engage in Christian industry. I wonder whether that same sentiment colors our Gospel presentation. Less cynically, and secondly, the evangelical mind rightly recoils from certain “Christian” traditions (e.g., Romanism) that so focus on Christian responsibility that the benefits of justification are obscured and even suppressed. Certainly, we must not swing to this extreme in sharing the Christian Gospel. Still, historical suppression of the benefits of justification and exaggeration of responsibility that attends Christian faith should not lead us to neglect the latter.

Nor, I must add, should we see Resurrection and regeneration merely as lists of responsibilities. Resurrection and regeneration supply a substantial share of the hope described in the Catechism above. Being raised with Christ we are “freed from all the power of the devil” and the crushing power of sin; by rising and ascending, Christ positions himself to “preserve” us, makes us the objects of his benevolent providence, grants us confidence that (as one grand hymn puts it) we will “soar where Christ has led,” and energizes us to be “willing and ready from now on to live for him.” That’ll preach, my brothers—just as surely as will Christ’s wondrous death.