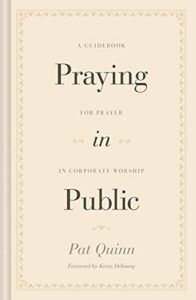 “But we will devote ourselves to prayer and to the ministry of the word.” Acts 6:4

As the passage quoted above indicates, pastors are called to devote themselves to prayer and the ministry of the word. The first is usually considered outward-facing (preaching), while the latter is considered inward-facing (praying privately). Pat Quinn’s new volume, however, suggests that dedication to prayer is also outward-facing. For this reason, he has written this book, which according to its subtitle is “A Guidebook for Prayer in Public Worship.”

The book has two major sections, which are evenly weighted. The first provides and details seven principles for public prayer. The second is a collection of the author’s public prayers, which serve as examples that can be emulated. Another way of thinking about this volume is that the first section provides the philosophy for public prayer, while the second demonstrates the application of that philosophy.

The introduction highlights the need for the volume. It does this by noting that public prayer is an aspect of worship, and as such should be taken seriously. DeYoung, in the foreword, highlights that few pastors would enter the pulpit without preparation, yet too often, they enter public prayer without forethought (12).

The introduction also provides the following seven principles that guide Quinn’s public prayers. These principles are derived from the prayers of God’s saints throughout the church age (20–25), and each is the topic of a chapter in the book.

Comment need not be made on each chapter; instead, we will focus on important arguments and unique contributions.

One element that might need some justification is the focus on only three types of prayers (Adoration, Confession, and Supplication). Quinn argues that these three summarize the content of public prayer in Scripture and church history. Further, they match the liturgy of the church he serves as a pastor (71–79). Adoration tends to be the opening prayer, Confession follows songs of praise, and Supplication is the “pastoral prayer” which follows the offering and precedes the sermon. In my experience, most churches I have attended have two prayers, not three. Most often, the prayer of confession is either missing or is integrated with the pastoral prayer.

The most compelling section of the book for me was the chapter on “Thoughtful and Reverent Prayer” in which he touched on the importance of prepared praying. There he noted that “spontaneous prayer” is often not spontaneous at all, for, with a lack of structure, prayers often wander back to well-worn roads (50). He also highlighted that the Psalms are highly structured, with many of them being acrostic. These Psalms demonstrate that “careful thought can express passionate emotion in prayer” (51).

This chapter left me wanting more. Indeed, I wish the volume had focused more on the philosophy undergirding the practice of planned public prayer. In my experience of church, planned prayer is the exception, not the rule. Accordingly, more focus on why prepared prayer is best would have been useful. In addition, a series of responses to some of the arguments from the other side (e.g., “planned prayers can’t be genuine” or “prayer is a conversation, which can’t be scripted”) would have been quite helpful as well.

What the volume may have lacked in philosophical foundations, it sought to make up for in practical utility. Quinn helps the reader think through whether fully-written prayers or only outlines should be used. He walks through the order of service at his church, helping the reader see the logic of the service’s order. In addition, he addresses issues of eloquence, cadence, length, and tone. Such additions make the book worthy of its subtitle.

As noted above, the second half of the book is dedicated to presenting the prayers of Quinn. In fact, Quinn says this book is “largely a book of prayers” (17). He compares it to The Valley of Vision, which is a book of Puritan prayers. In essence, Quinn is attempting to provide modern examples of what public prayers should be like in a 21st-century church.

These example prayers may not be as eloquent as the Valley of Vision, but they are quite helpful to modern pastors. One of my pastor friends, who prays the pastoral prayer at his church weekly, mentioned that Quinn’s prayers helped him see some areas of prayer that he has not historically integrated but will from now on. For instance, Quinn prays for students, single parents, parents of wandering children, and a host of others. Such people might not normally be mentioned in the public prayer of a church, but when they are, such people feel deeply that they are welcomed and a part of the larger assembly.

I picked up this volume partly because of sensing a recent shift in our church. I have noticed that our pastors have been far more intentional in their prayers, and this has helped me as a congregant. My hope is that Quinn’s volume will help pastors intentionally focus on their public prayers so that their “prayer not only models for us how to pray but makes us want to pray” (53).