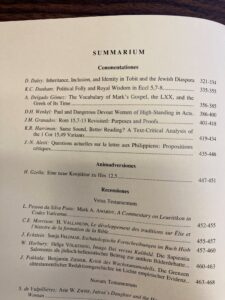 Kyle Dunham, our OT professor, has been working on what I think will become the definitive treatment of Ecclesiastes (to be published Evangelical Exegetical Commentary series). One of the fruits of that labor is the production of many good article-length treatments of topics that derive from his study of the book. Most recently, Kyle was published in Biblica, a prestigious journal of biblical studies. A brief summary is that Dr. Dunham is defending the view that the author of Ecclesiastes held an overall positive view of royal leadership, a point debated within scholarship. The fuller abstract follows:

“Qohelet’s critique of royal leadership in Ecclesiastes 5,7-8 (8-9) constitutes one of the book’s most difficult texts. Recent scholarship has moved toward understanding both verses as a criticism of corrupt government, in that the king is complicit in the graft because he too profits from exploiting the land and its farmers. Such a reading comports with the nearly uniform approach to Ecclesiastes in recent scholarship whereby Qohelet is understood as espousing an explicitly negative view of political leadership. In this essay I argue for a fresh understanding of the verses, based on discourse analysis, that favors an older, principally Continental view. In this proposed reading v. 8 offsets v. 7, with the king viewed positively as a mitigation to rampant political corruption when he is committed to order, stability, and productivity. Rather than serving as another pronouncement of Qohelet’s negative view of leadership, Ecclesiastes 5,7-8 affirms the proper use of royal power when the king exercises his office legitimately.”