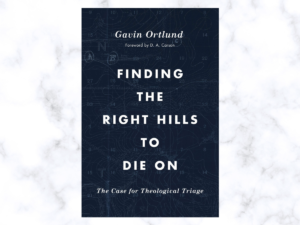 I recently read Finding the Right Hills to Die On: The Case for Theological Triage by Gavin Ortlund. The concept of theological triage (coined by Albert Mohler, as far as I know) concerns categorizing doctrinal matters such that some are recognized as more vital than others. For instance, on all orthodox accounts, the divinity of Christ is considered a vital doctrine, while the variety of angelic beings would not be considered very vital.

The concept is called triage, because on the literal battlefield medical personnel would have to determine which subject to focus on based on the seriousness of their wounds. Those with amputated toes could wait for those with amputated arms. In the realm of theology, the categorization is useful in determining whether we would partner with someone outside the church, minister with someone inside a church, or even whether we would call someone a brother altogether. The more serious the doctrine, the more distance is required.

The book is divided into two sections. The first answers the question, Why theological triage? The second seeks to give practical application of theological triage to some of the most significant issues within Christianity.

The first half of the book outlined the dangers of both doctrinal sectarianism (dividing over unnecessary things) and doctrinal minimalism (not seeing doctrine as important). The latter warning is one I think my students need to hear. For some reason, younger students seem to lean heavily towards ambivalence in doctrine. Ortlund argued, and I think persuasively, that it is “better to be wrong than indifferent” (54).

The second half of the book concerns the application of theological triage. Gavin suggests four categories of doctrines:

He includes the following issues in the first three ranks:

A few weaknesses of the book stand out. First, there is a flexibility of contexts that triage discussions often fail to fully reflect. For instance, doctrinal differences may be acceptable on a spectrum depending on the type of ministry collaboration and the concentration of believers in a locale (for instance, I would likely be more lax on some doctrinal matters in a Middle Eastern context, where the country has only a handful of believers).

Second, as he has defined them, the categorization of doctrines may differ from Christian to Christian. Ortlund recognizes this in the book, noting that for some Christians cessation of gifts could be a third order doctrine rather than a second order (114). Further, I know some King James Only advocates would argue that their doctrine on inspiration of the KJV is a first rank doctrine for the very same reason Ortlund suggested the virgin birth is a first order doctrine (“﻿Some first-rank doctrines are worth fighting for because they mark a fault line between the gospel and a rival ideology, religion, or worldview” [75]).

Finally, it is not clear that the millennial views and the creation days are third-order doctrines. As for the first, postmillennial churches have a different goal than premillennial or even amillennial churches. Could collaboration work effectively in such contexts? And in regard to creation issues, many of the deviations from the plain reading of Genesis 1–3 have substantial theological consequences (e.g., denying a literal Adam), even beyond the hermeneutic models they propose.

To be clear, I appreciate Ortlund’s categories and believe they are useful. They are not objective however, nor does he claim they are. Anyone reading this book hoping to walk away with an ability to neatly categorize doctrines and know how others will do so may be disappointed. Here as elsewhere, what one brings to the categories determines what fits in the categories.

Ortlund with clear writing and good organization has written a book that will help a general audience understand where the current discussion stands. Further, the work will make the reader think more deeply about substantial issues of the faith, including when we should press for unity, when we should separate, and why we should do either. Take up and read.