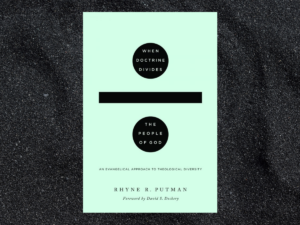 Theological diversity should not exist. But it does. I disagree with people who have the same background as I do, went to the same schools, and go to the same type of churches. How can this happen and what should be done about it?

These are the questions that are centrally addressed in When Doctrine Divides the People of God. What made me interested in this book, however, was the subtitle and author. The subtitle is “An Evangelical Approach to Theological Diversity.” Now in recent years many have claimed the label evangelical who are not really aligned with historic evangelical thought on issues like scriptural authority and trustworthiness. But the author of this work, Rhyne Putnam, has legitimate evangelical credentials. He teaches at one of the Southern Baptist Seminaries (New Orleans Baptist Theological Seminary), and he has written a book defending evangelical doctrine (In Defense of Doctrine: Evangelicalism, Theology, and Scripture).

Putnam breaks the volume into two sections. I originally picked up the book to read the second: “What we should do about doctrinal disagreement.” I was intrigued, however, by his development of the first: “Why we disagree about doctrine.” This blog post is about this first section.

Five chapters are devoted to providing reasons for disagreement:

The first chapter, far from casting doubt on the clarity of Scripture, affirms that Scripture can be read and understood, in its essential parts, by all who have the Spirit. The second chapter highlights the role of background information in our evaluation of the biblical text. It is possible that we read differently because we understand the historical context differently, or because we understand the genre of a text differently.

The third chapter is one of the more technical. Here Putnam shows that many of our theological disagreements rest on different ways of coming to theological conclusions. While we all seek deductive argumentation that leads to indubitable conclusions, much of Scriptural interpretation is abductive in nature. Abduction, different from (or a specialized form of) induction, is described as an “inference to the best explanation.” In some of the key theological debates, the issue at hand is proposing an explanation that best handles all the data. Our disagreements, then, are different ways of aligning the individual messages of the text into a comprehensive whole. And since the database is so large, disagreements are unsurprising.

That we feel differently is the focus of the fourth chapter. Putman follows the research of Jonathan Haidt, who investigated why people differ on religion and politics. By following, I do not mean that Putman blindly walked where Haidt led. No, Putman brought to the surface many disagreements he has with Haidt; nevertheless, Haidt’s insights are broadly applicable to the current discussion. Primarily, Haidt showed that humans emotionally evaluate before rationally evaluating. This is the opposite of what most people think concerning themselves. Haidt in an article titled “Emotional Dog and its Rational Tail” says that reason functions “more like a lawyer defending a client than a judge or scientist seeking truth” (820). In other words, we naturally and automatically (based upon prior knowledge and especially experience) make conclusions, and reason functions to defend our conclusions more than confirm them.

Putman provides an example of how this works. Think of the terms fundamentalism, progressive, Calvinism, and Arminianism. These likely produce immediate reactions of distaste or warmth. Our prior experience has formed a natural, immediate reaction.

Beyond this, Putman, following Haidt, suggests that we have differing moral tastes. Some are more inclined towards fairness (a left-leaning value), while others towards sanctity (a right-leaning value). These tastes may be natural, formed, or a combination. Nevertheless, once there, they affect the way we view reality.

Putman’s distinction between emotions and affections (following Edwards) is helpful. He notes that our ultimate choices are driven by our developed tastes (our affections). We may starve or feed such tastes. Accordingly, we are not chained to non-rational forces.

The relation of these non-rational elements to our actions is particularly relevant in the current political climate. Putman highlights that groupthink is a natural result of the human situation. We embrace a group, finding it to hold the values we hold. Soon, if we are not careful, we begin to think of that group in only a positive light and we begin to see those in the opposite group in an only negative light. Such conclusions come not by way of reasoned thought, but by immediate, non-rational processes. Accordingly, the facts of a case need not matter, for we automatically judge the results without the need for reflection.

The effect of groupthink on theological thought is significant. Is it possible that we have too easily brushed off competing interpretations because it disagrees with our “group”? We certainly believe this about our theological opponents, but we are often blind to it in ourselves.

Putman concludes the fourth chapter with a series of helpful statements about the relationship between our feelings and rational abilities:

The final chapter in the first section of the book highlights the role that our biases have in interpretation. Once someone has latched on to a particular understanding, it is difficult to cause a change of mind. Our minds have an amazing ability to view data positively that supports our position and to disregard data that would jeopardize our beliefs. In many ways, confirmation bias is a virtue; nevertheless, it is something of which we must be aware.

In conclusion to this review of the first half of Putman’s work, I would say that Putman has helpfully mined the reasons for diversity of belief. Though I mention it little in this review, he does a splendid job giving examples of disagreements and how each of these five factors is at play in those theological debates. The reasons believers who are committed to the same Lord, the same text, and the same goal in life disagree is complex. Putman’s work details those reasons in a helpful manner. In this review, I focused on the non-rational reasons, for I have found that those are the ones we too easily overlook.