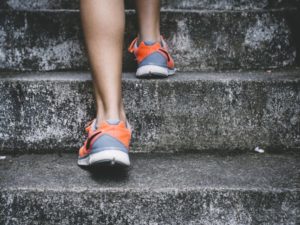 There it was in my Facebook feed. One of those ubiquitous memes from well-meaning fellow believers:

God does not want you to try harder, he wants you to trust him deeper. Stop trying. Start trusting.

But is it true? Does God really not want us to “try hard” to become like Christ? Should we ever get to the point in our Christian sanctification where “strivings cease”? This has long been a talking point for Wesleyan and Keswick theology, in which a sort of Christian perfection may ostensibly be realized (whether temporarily or permanently) through passivity—by “letting go and letting God.” What is surprising is the surge of this kind of language in Reformed thought.

It seems that the grand hallmark of the Reformed resurgence, justification through Christ alone and apart from works, has spilled carelessly into discussions of sanctification, where such an emphasis is frankly incorrect. We are sanctified, yes, by means of union with Christ and by the ordinary means of grace, but never apart from works: works are an integral and necessary part of sanctification. Note the following:

There can be no doubt, surely, that moral resolve, determination, discipline, effort, struggle, straining, and striving are the verbs of sanctification. Now, to be sure, these verbs do not represent the totality of our sanctification, but they surely cannot be denied a place without doing great despite to the Christian Scriptures.

But Mark, you say, what about Psalm 46:10: “Be still [NASB—cease striving] and know that I am God”? There is it in black and white! Christians need to cease striving! OK, but let’s not neglect the context. What we have here is at best a command for believers to stop worrying and to trust in God (i.e., the context could possibly suggest this [so Craigie], and the idea itself is unobjectionable [cf. Ps 37:7]). But it is more likely that Psalm 46:10 represents a command for violent and savage people who hate God to stop warring against him and to acknowledge his sovereignty [so Goldingay; Ross; Kidner]. But in no hermeneutical universe can this verse be taken as a command for believers to stop trying to be holy and instead to become holy by mere reflection on God.

The testimony of Scripture is clear. God wants us to try harder (after all, the standard is for us to strive against sin to the point of bloodshed—Heb 12:3–4). But he also wants to trust him. It’s not an either/or; it’s a both/and: Trust and obey.