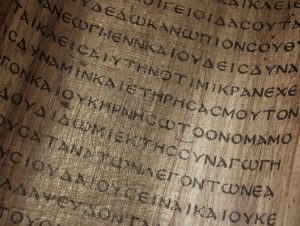 One of the most complex issues in biblical interpretation lies in understanding the ways in which later writers of Scripture used earlier texts. Sometimes NT writers cite or allude to the OT in ways which, at first blush, seem to disregard the context or, worse, to alter its meaning. This leads many readers of the NT to wonder if its authors were always faithful to the original intent of these passages. My goal in this post is more modest than to provide a full response to this question. I want instead to suggest that one particular category for understanding how NT writers use the OT has not been fully developed and may help to clarify some of the so-called problem texts in the NT’s use of the OT.

Several decades ago Douglas Moo proposed that at least some difficult cases may have a simpler solution. He suggested that some NT citations and allusions may arise simply from the degree to which earlier biblical texts permeated the thinking of later authors:

Granted the prominence played by the Old Testament in the lives and cultural milieu of the New Testament authors, it is more than probable that they frequently used scriptural language other than as authoritative proof. . . . New Testament writers often—without intending to provide a ‘correct’ interpretation of the Old Testament text—use Old Testament language as a vehicle of expression (“The Problem of Sensius Plenior,” 188).

G. K. Beale has identified this category as the “assimilated use” of Scripture. But in his handbook on the NT use of the OT he provides only a few and, to my mind, dubious examples where this takes place.

Over the last few years, I’ve investigated a field of study which I think may develop Moo’s suggestion in a useful way for biblical studies. The field is corpus linguistics. Corpus linguistics analyzes how spoken and written discourses “prime” later speakers and writers to put together certain words and phrases in preference over other combinations. For example, have you ever noticed that in the course of a conversation someone might use a distinctive word or phrase that in turn gets “picked up” and used by other speakers in the conversation? Corpus linguistics suggests that every time we hear or read a word in combination with other words our minds are trained through what we might call a “mental concordance” or “word map” to use that word or phrase in similar ways in the future. This explains why we would typically use the words set or light with fire (rather than place or burn), why the adjective hard is combined with work or evidence (but not soft), and why happen is mostly associated with unpleasant events.

When it comes to biblical texts, it’s important to realize that most biblical authors likely committed large portions of Scripture to memory. In the ancient Near East scribes were often trained by memorizing and reciting entire books to develop their facility for thinking and to hone the mental discipline needed to accurately copy and write documents. Renowned orators from the Greco-Roman period often sprinkled their speeches and writings with sayings from the classical poets, such as Homer, to demonstrate that they were well-educated. NT authors such as Matthew and Paul also likely cited or alluded to OT texts from memory.

Combining these factors leads to the conclusion that the OT “primed” NT writers with a mental “concordance” or “map” that influenced their own word choice and phrasing. I want to suggest one “difficult” passage where this may explain how the NT author is using the OT.

Matthew cites the lament of Jer 31:15 to characterize the decimation following Herod’s slaughter of infants: “Then was fulfilled what was spoken by the prophet Jeremiah: ‘A voice was heard in Ramah, weeping and loud lamentation, Rachel weeping for her children; she refused to be comforted, because they are no more’” (Matt 2:17–18). Many interpreters see here a form of typology, as the text in Jeremiah is not a prediction and does not use the conjugation usually signifying a future occurrence. S. L. Edgar, in fact, derided Matthew’s use of Jeremiah as the NT’s “most striking case of disregard” for the original context (“Respect for Context in Quotations from the Old Testament,” NTS, 58).

Although Matthew uses fulfillment language here, several factors suggest that his reference to the OT is an example of “priming.” As an aside, the use of fulfillment language by Matthew often connotes the realization of the full potential of a historical pattern in the life and work of Christ rather than what we might call the unique closure of predictive prophecy. Here are a few reasons that I think this may be an instance of OT priming. First, there are clues in the Jeremiah passage that the prophet himself may have been using a well-known refrain already in circulation. Ramah is an unexpected place for Rachel to be weeping over the loss of her people. Although one tradition identifies her own burial place as nearby, nowhere in Scripture does she weep for her family. More likely, her mourning serves as a poetic metaphor for the decimation of the population of Ephraim (Ramah borders Ephraim) during the deportation by the Assyrians in 722 bc. As Ramah was also a gathering point for the exiles sent from Judah in 587 bc (Jer 40:1), the prophet may have adopted these poetic lines to express a like sense of despair at their removal to Babylon. This conclusion also finds support in the structure of Jer 31:15–22, where the rhythmic poem concerning Rachel’s weeping (v. 15) is set off from the reply, which comprises the oracle proper, by the repetition of “thus says the Lord” (v. 16). Jeremiah’s use of a traditional refrain to express his grief signals a “priming” that precedes Matthew. Second, the use of quotations in Matt 1:18–2:23 serves as the structural key arranging the five sketches covering the infancy of Jesus. Each sketch focuses on an OT citation said to be “fulfilled” or “completed” in an aspect of Jesus’ childhood, with the quotations, rather than their narrative introductions, organizing the passage. This rhetorical linking of quotations is in keeping with the practice of ancient orators mentioned earlier, lending credence that the citations here serve a literary or persuasive purpose. Third, Matt 2:17 uses a unique fulfillment formula (“then was fulfilled”; cf. Judas’s death in Matt 27:9) emphasizing the timing and evil human agency of the event rather than its closure as predictive prophecy (elsewhere “this was to fulfill”). If, as suggested by some, Matthew restricts his formula-quotations to citations from the prophets, his use of a formulaic text from Jeremiah serves his purpose in highlighting how Jesus fully realizes the messianic backdrop of the prophets.

While the issues that surround interpretation such as this are admittedly complex, I would suggest that the foregoing example is one way in which the OT primed NT authors to think and write in certain ways. Although this is just one example, a careful study of the NT’s use of the OT may reveal more examples that shed further light on the dynamic ways in which earlier Scripture prepares the ground extensively for later Scripture. As Christian readers, we should expect no less, given the unity and coherence of divine revelation and of truth itself.