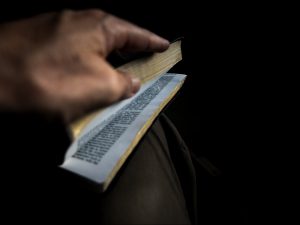 I require my students to read the Bible in large portions. For instance, in the Gospels class, I require students to read an entire Gospel in one sitting. While most choose Mark (it is the shortest!), I usually encourage them to read John or Matthew.

Why would I require such an onerous task? Well, actually, students generally do not find it onerous. In fact, I have had students indicate their appreciation for the assignment (by the way, that is pretty rare!). Let me mention a few reasons people should read large portions of Scripture.

First, it is the way the books of the Bible were originally written to be read. Imagine being in Rome when the book of Romans was first delivered. Now imagine the reader only reading for three minutes (corresponding to the end of chapter one) and saying, “well, that is enough for today, we will read some more tomorrow.” The crowd would be outraged and would demand the man continue reading. In the same way, sometimes we need to be reminded that this is a wholistic book, which is only artificially separated.

Second, reading large portions gives us a broader context for the overall writing. One major lesson I have learned over the course of my study is that one can never underestimate the literary skill of the authors of Scripture. Often there are connections between the beginning of a book and its conclusion, but if we never read the whole thing at once, we may never see those connections.

Third, some lessons can only be gleaned when reading large portions of Scripture. For instance, Revelation is clearly designed to be read in one sitting. We can sometimes get bogged down in the details of the text, seeking to understand every nuance. It seems to me, however, that the message of Revelation is best captured when we see the whole sweep of the text in one sitting. By reading it all together one gets the full sense of God’s power and purposes.

In another post, I will talk about reading strategies, as well as discuss why I think it seems unnatural for most Christians today to read entire books of the Bible.

[1] N.T. Wright is a polarizing figure. The challenge is not so much that he holds to some erroneous doctrine—many do that—but that he is so eloquent in his presentation. Hardly do I read or listen to Wright without considering his considerable rhetorical skill. Of course, Wright gets a lot of things right, and when he speaks on something that I agree with, I am usually impressed with his insight. In this case, I appreciate his perspective on this question (not his new perspective J).

David Elie
Commented On 13 Aug 2022
I do know a good many people that consider themselves “reformed” based solely on the d...