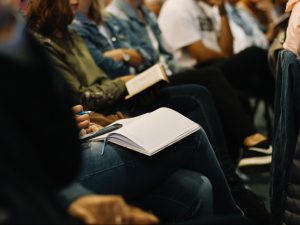 In his classic work on preaching originally published in 1870, On the Preparation and Delivery of Sermons, John Broadus spends some time noting the importance of persuasion in the application of preaching.

“The chief part of what is commonly called application is persuasion. It is not enough to convince men of truth, nor enough to make them see how it applies to themselves, and how it might be practicable for them to act it out; but we must ‘persuade men’” (170)

In order to accomplish this work of persuasion, preachers must be willing to show their hearers the reasons or motivations for them to obey.

“Persuasion is not generally best accomplished by mere exhortation but by urging…some motive or motives for acting or determining to act.” (171)

Broadus offers five broad categories of motives a preacher could use to persuade.

Desire for happiness, or dread of unhappiness.

While preachers must be careful not to appeal to happiness as the primary or sole reason for obedience, it is a biblical motive.

“Experience testifies that when [happiness] is directly sought, it evades the seeker.…Certainly happiness should always be subordinated to duty and affection; but when subordinated, it is a legitime desire and a legitimate basis of appeal. The Scriptures appeal not only to feelings of moral obligation, but to hopes and fears, for time and for eternity” (171)

Desire for holiness/goodness; appeal to the conscience

People are sinful, but their conscience has not been completely removed so that they have no concern for right or wrong. Thus, a preacher can appeal to the desires of the lost and of the redeemed to be better.

“The thorough depravity of human nature should not make [the preacher] forget that goodness can always touch at least a faintly responsive chord in the human breast. He ought to hold up before his listeners the beauty of holiness, to educate the regenerate into doing right for its own sake and not merely for the sake of its rewards.” (172)

Desire for recognition or prestige

While a desire for significance can easily turn sinful, the Bible does teach the inherent worth and dignity of individuals.

“A person reaches his highest worth in Christ. God loved and gave his Son for each of us. God knows everyone. He takes notice of all of our needs. To God each of us is a person, each is significant.” (172)

Within an uncertain world, people long for security.

“[Christianity] cannot promise us freedom from care or longevity of life, but it can give us security…The highest security, eternal security, is found in Christ and only in Christ.” (173)

In order to fight against selfishness, preachers can appeal to the love people should have for their neighbors who are suffering or in need. Parents should be urged to obey by considering the effect their decisions will have on their children, as husbands and wives should be called to obedience out of love for each other. But the greatest love anyone should have is love for Christ.

“To [love for Christ], above all other motives, the preacher should appeal. Far from excluding others, it intensifies while it subordinates them” (173)

Above quotations are from Broadus, John A. On the Preparation and Delivery of Sermons. Fourth Edition. San Francisco: Harper and Row, 1979.