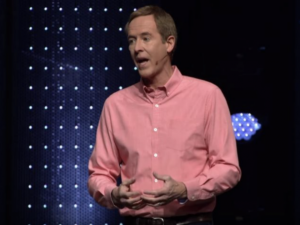 These things happened to them as examples, and they were written as a warning to us, on whom the ends of the ages have come.

So says the Apostle Paul in 1 Corinthians 10:11. The statement caps a rapid-fire sequence of references to the Old Testament in a timeless warning against moral vices common to both the OT and NT ages—idolatry, sexual immorality, and discontent—and in so doing establishes a certain moral continuity between the testaments. Paul’s summary explains, in part, how “all [OT] Scripture is [still] profitable” for believers today (2 Tim 3:16–17).

It is because of this passage (and many other passages that highlight the continuing value of the OT for the present age) that I am troubled by Andy Stanley’s recent book Irresistible: Reclaiming the New that Jesus Unleashed for the World. In the book he argues that, due to Christ’s fulfillment of the Mosaic Law, NT believers are “unhitched” from a Mosaic Law that has become “obsolete” in an absolute sense, that is, in both precept and principle. As a Christian and as a dispensationalist I reject Stanley’s model out of hand.

For decades, adherents to the dispensational approach to the Scriptures have been dogged by charges of antinomianism, and it seems that every time careful dispensational scholarship begins to lay that accusation to rest, some under-informed dispensational populist gives fresh life to the charge for the next decade or two. And it grieves me. This is why I gladly lend my voice to my covenantal and progressive covenantal brothers in denouncing Stanley’s doggerel. My arguments are not crafted exactly as these other reviews; still, I do not hesitate in the least in affirming with them the continuing moral/ethical value of the Mosaic Law for the present age.

With Schreiner, I am convinced that the whole body of Mosaic precept has been set aside for the present age. It exercises no more direct authority on the NT believer than, say, the national laws of Rwanda exercise on a former resident of that country who has been naturalized into the United States. For him, the laws of Rwanda are a law code for another people in another place at another time. Even in so weak a parallel, however, we cannot avoid the fact that significant continuity exists between the laws of Rwanda and those of the United States.

How much more should we expect continuities between the moral expectations, respectively, of the Laws of Moses and Christ! Because, unlike the modern analogy, these two biblical law codes derive from the selfsame, immutable, and non-capricious source—God’s very own nature. Every single OT law and historical lesson (“all Scripture”), as such, has value for saints in every age. That is, even when there is no direct application of OT laws in terms of precept, there is always value in terms of principle.

For instance, the Mosaic law requiring that houses be built with fences around the edges of their roofs (Deut 22:8) has no precept value today. Not only is this law part of a code designed for another people, it is also designed for another culture (one in which people stood about on their roofs). Still, this law informs us, in principle, that God is immutably concerned with issues of liability and safety. This principle, in turn, necessarily informs our New Testament ethic. In other words, Deuteronomy 22:8 is profitable for the [NT] man of God, as indeed all Scripture is (again, 2 Tim 3:16–17). And because it remains profitable, we can’t “unhitch” ourselves even from a law as obscure and culture-bound as this one.

Some will protest, of course, that I have embraced a “moralistic” reading of the Law. I would respond simply that moralism is a religious system that seeks eternal safety in the keeping of the law rather than in the person and active/passive obedience of Christ. The latter—the Gospel—is the blessed opposite of moralism and legalism, but remains the friend of morality and law.

If I can go a step further, however, I would argue that Stanley advocates not merely for an untoward unhitching of the modern believer from OT Law, but also from NT law. As many libertines before him, Stanley argues that the biblical expectation of NT believers is reducible to acting in “love” (autonomously defined) as we go through life, thus releasing us from the fact of rules generally. But this is absurd. God’s whole law may indeed be subsumed under the principle of love (Gal 5:14; Jas 2:8), but this does not mean that these laws may be reduced to love or replaced by love. Christians have a robust body of imperatives in the NT that they must obey not only in principle but also in precept. The “law of liberty” or “law of love” never diminish this body of rules, but, with NT practice as our guide, may actually expand it. Acting according to the law of love/liberty, for instance, Paul advocated multiple times for the voluntary addition of and submission to nonbiblical dietary restrictions and outdated Jewish customs in the interest of love (so, e.g., Rom 14:13–23; 1 Cor 8:13; 9:19–23; Acts 16:3). This is how Paul anticipated that we use our “liberty” and our “love” relative to law. Stanley’s use of “liberty” and “love” to scuttle law is quite the opposite of this intent.

Some will protest, of course, that I have embraced a “Pharisaical” understanding of law. I would respond simply that Pharisaism is the oppressive multiplication and imposition of rules in the interests of pride, personal advance, and self-glory. What I have argued here is a personal and voluntary submission to another’s rule of life in the interests of love and the advance of the gospel. There is a vast gulf between this practice and Pharisaism.

To conclude, I plan to continue debating intramurally with my Reformed and Progressive Covenantal brothers about the many details of Law, Grace, and NT praxis. And we will continue to find much over which to disagree. But the idea that we may simply “unhitch” from the Law should bruise the sensibilities of all who call upon the name of the Lord, irrespective of the particular biblical theological system to which we adhere.