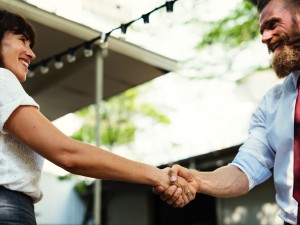 Based on some practical questions I received in response to my earlier post on transgenderism, I thought it would be helpful to give a follow-up post on the question, Should a Christian use a transgender person’s preferred pronoun?

While I have not had to practically face the question in the title above for myself, it can be very real for others. How you answer this question affects how you interact with and identify coworkers, classmates, and maybe even family members, in private or social settings. Contradicting what someone asks you to call him or her (by calling him her and her him) is a disagreement on not just a personal level, but on how we understand reality and God’s created order. It’s not just a personal matter―it involves the very foundations of one’s worldview.

Denying someone’s preferred pronouns could also be the grounds whereby the offended attempts to prosecute you for allegedly violating their civil rights. Under “Examples of LGBT-Related Sex Discrimination Claims,” the U.S. Equal Employment Opportunity Commission cites the following as an offense: “Harassing an employee because of a gender transition, such as by intentionally and persistently failing to use the name and gender pronoun that correspond to the gender identity with which the employee identifies, and which the employee has communicated to management and employees.”

And what if this workplace situation is expanded to the classroom? Will students be censured, suspended, or expelled for failing to use someone’s preferred pronoun? What if your freshman daughter goes to college to find out her senior roommate is a man who identifies as a woman named Tiffany? Is your daughter discriminating by asking for another roommate?

But this past week, Secretary Jeff Sessions published a memo and concluded, “Title VII’s prohibition on sex discrimination encompasses discrimination between men and women but does not encompass discrimination based on gender identity, per se, including transgender status.” This is a reversal of the previous administration’s policy. So it appears that one may not be liable to legal ramifications for refusing to use a person’s preferred pronoun after all (or, at least, not for now).

Getting to the heart of the matter, the issue is not so much the affirmation of someone’s preferred sex as it is a denial of reality, which is lying. The issue of lying, in this case, is tethered to a topic that may bring about difficult circumstances for contradicting somebody, making the lie all the more tempting.

One strategy to simply avoid the issue could be to evade the use of singular gender-specific pronouns, but this will likely be a short-term solution. Using plural pronouns (“they”) for the individual may not always be practical.

Another strategy could be to always use the person’s name. I do not personally have a problem with referring to someone by their name, however unconventional or odd it may seem to me to call Tom Sue or Sue Tom, for instance. Some names in our culture are even commonly used for both men and women. As John Piper said when addressing this issue, “Calling someone by that arbitrary name their parents chosen [sic] or the one they choose halfway through life may not imply agreement with all that that name was created to signify by the person.” At the same time, this strategy will likely also become impractical at some point. In fact, both strategies may even agitate the issue all the more.

Yet another strategy could be this―suppose a set of currently proposed gender-neutral pronouns became common, making the issue a moot point. But the context of their creation in our present day is to intentionally erode God’s created order as it relates to the male and female sexes. Given this context, using a gender-neutral pronoun, unfortunately, associates one with the driving force behind using these pronouns in the first place. And while they might be used on some college campuses or in other select settings, it is not common now and likely not to become common anytime soon.

So, in the end, my conclusion would be that, whatever the repercussions may be, a Christian cannot deny reality and refer to a person as being the opposite of the sex given to him or her by God. A Christian must tell the truth, even it means that the Christian may feel compelled to reduce the friction in his life over this matter by finding a job, school, or whatever where the issue is nonexistent or not a pressing matter, as difficult as that may be.

At the same time, the Christian should remember to lovingly and kindly interact with anyone who claims to be transgender with the hope of being a Christian witness. Disagreement does not mean disengagement and forfeiting a chance to give the gospel. It may even be that a Christian’s firm but gentle stance for truth in this matter brings about the opportunity to be a gospel witness.