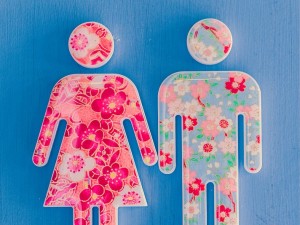 Former Olympian and gold medalist Bruce Jenner transitioned to Caitlyn Jenner. A once-decorated army soldier who leaked classified data, Bradley Manning transitioned to Chelsea Manning, who is again in the news for recently being offered a position at Harvard as a visiting fellow (the offer has been rescinded). Despite what seems to have previously been men among men, each of these men now claim to be women. What are we to think of those who “transition” from one gender to the other and thereby become “transgender”?

Bringing it closer to home, I was asked by a junior higher in my church about how to think of her classmate who had allegedly chosen to switch genders. I found out along the way that her older brother has to suffer having a girl change in his locker room’s bathroom stall to prepare for gym class since she claims to be a boy. He doesn’t see her change, but she is apparently free to access the locker room, come to the stall, and leave while everyone else changes in the same locker room, making for an uncomfortable situation.

Have you ever had to personally face these questions? What do you think of the Jenners and Mannings of the world? Who is changing in your child’s locker room? And how do we define transgenderism anyway? Is it something natural, morally acceptable, and maybe even fluid?

As uncomfortable as the topic may be, we face it more and more every day in our society and are pressed for biblical answers. But before getting too mired in modern notions of transgenderism, let’s ground ourselves first in Scripture.

In the beginning, God created Adam and Eve in such a way that sexual orientation, birth gender, gender identity, and sexual behavior were altogether male or female (Gen 1:26–28; 2:18, 23–24). To claim that God intended a masculine and feminine mix of the above characteristics is out of accord with what God Himself states in in His Word.[1]And if we are forced to use the modern vernacular of having a “gender identity” that corresponds to our anatomical “physical sex,” a male gender corresponds with the male sex, the female with the female, and never the twain should switch or mix in any way.

Unfortunately, however, Adam and Eve sinned, bringing death and suffering into our world, physical defects included. God stated to Moses, “Who has made man’s mouth? Who makes him mute, or deaf, or seeing, or blind? Is it not I, the Lord?” (Ex 4:11). These defects may extend to other parts of the human anatomy as well. As Jesus told His disciples, “For there are eunuchs who have been so from birth” (Matt 19:12).

But defects in general and especially those that pertain to anatomy that is distinctly male or female were not to be sought or encouraged. In the case that a male’s distinct anatomy was marred by defect or mutilation, he was forbidden to offer sacrifices or participate in Israel’s formal worship of God (Lev 21:20; Deut 23:1). The idea was to not imitate pagan worship that involved the mutilation of one’s genitalia in order to change one’s gender.[2] Cross-dressing was explicitly forbidden as well (Deut 22:5). Thus, the presence of a defect, by birth or mutilation, is not seen positively in Scripture. Moreover, defect or not, presenting one’s self as the opposite of one’s sex was explicitly forbidden.

In principle, anything that strays from God created order for man as male or female is not what God intends it to be, and anything that man intentionally does to present himself or herself as the opposite sex of what God has anatomically ordained is sin.

Can Someone Suffer a Truly Transgender Situation?

Having this biblical understanding in hand, let’s consider the possibility of an anatomical defect that makes it genuinely difficult to identify the sex and gender of an individual. The Mayo Clinic describes ambiguous genitalia, the situation in which true transgenderism occurs: “Ambiguous genitalia is a rare condition in which an infant’s external genitals don’t appear to be clearly either male or female. In a baby with ambiguous genitalia, the genitals may not be well-formed or the baby may have characteristics of both sexes. The external sex organs may not match the internal sex organs or genetic sex.”[3]

Given this difficult situation, is it morally permissible for a true transgender (or intersex) individual to choose his or her gender? Dr. Elizabeth Mitchell notes, “True hermaphrodites are often raised as males (about 75%), but 80% of them are XX, genetically female.”[4] If “the true prevalence of intersex is seen to be about 0.018%,”[5] then perhaps 18 people out of every 100,000 will be born with intersex conditions, and 14 or 15 of them will be raised as males.[6]

Some might say that an individual in this scenario would have to be convinced that this choice is correct and honoring to God, especially if this choice will undo what his or her social norms have come to be.[7] Or perhaps this individual should see his or her suffering this situation as something described by Jesus and glorify God through celibacy (Matt 19:12; cf. 1 Cor 7:6–7, 32).

Having considered Scripture, it becomes fairly easy to navigate our way through the issues that present themselves today, though society is increasingly hostile to our biblical conclusions. If transgender is defined as it is commonly used today, to “those whose psychological self (‘gender identity’) differs from the social expectations for the physical sex they were born with,”[8] then this kind of transgenderism is sin. It claims that an individual who is anatomically male could be psychologically female, and vice versa, something forbidden in Scripture. God’s Word does not allow us to make false distinctions between sexual orientation, birth gender (based on anatomy), gender identity, one’s sex role in society, or sexual behavior.[9] God intends these characteristics to be altogether male or female in keeping with how He created them to be.

And, if transgender is so elusive as to be “an umbrella term for transsexuals, cross-dressers (transvestites), transgenderists, gender queers, and people who identify as neither female nor male and/or as neither a man or as a woman,”[10] then we stray from God’s created and intended order all the more. The fact that we even have to address these kinds of matters today shows that God has given our society over to a debased mind to do what ought not to be done (Rom 1:30).

For the vast majority of humanity that is clearly male and female, we should live as God created us to be and not attempt to transition from one physical sex to the other or land somewhere in between. Transgenderism as it is commonly defined today is sin.

While we may not know why exactly God allows some individuals to be in a genuinely intersex state, God’s truth is sufficient to guide these individuals, and may such a one glorify God through this suffering and live with the hope that He will one day glorify the bodies the redeemed, anatomical defects included (Isa 35:5–6; Phil 3:20–21; 1 John 3:2).

[8] I originally found this definition from “Definition of Terms” by the Gender Equity Resource Center of Berkeley University of California. Online: http://geneq.berkeley.edu/lgbt_resources_definiton_of_terms. Accessed 25 Apr 2015. Though this webpage is no longer available today, a quick internet search of this definition shows that it is commonly used by many institutions.