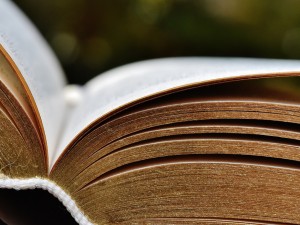 The title of my post reflects a recent article written by Tim Challies, the well-known and prolific Reformed evangelical blogger. Over more than a decade, Challies has offered a clear voice for certain segments of conservative evangelicalism. In this post Challies addresses the future of the Bible in the digital age. He contends that possible fears that the Bible is growing obsolete are unfounded. Rather, the Bible is God’s enduring message to humanity and transcends the medium of the printed book.

The Bible takes many forms as a result of modern technology, suggests Challies, but this in no way diminishes the Bible: “We assume that since we first encountered the Bible as a book, this is how it has always been and how it must always be. Now, as the printed book begins to fade, many are worried that the Bible will fade with it. But it won’t because the Bible is not essentially a book.”

Although Challies marshals a number of helpful facts related to the history of the Bible, I must take issue with the implications of several assertions he makes. Challies would not claim, I’m sure, that his post is a technical treatise on the nature of the Bible. Yet in supporting his main premise, Challies includes several confusing and misleading statements. These claims subtly undermine a right understanding of the doctrine of Scripture.

First, Challies implies that the Bible is not necessarily written revelation. He writes, “The Bible was at first oral transmission passed from person to person, events and conversations observed, remembered, and shared. But it was still the Bible.” Challies suggests by this that the Bible began as oral testimony preserved in the collective memory of God’s people. Such an understanding of the nature of the Bible is at odds, however, with the historic Christian doctrine of Scripture. In reality, its lack of specificity has more in common with the neo-orthodoxy of Karl Barth and Emil Brunner. Historic Christian theology contends instead that Scripture is divinely-inspired, verbal, propositional revelation in written form. To divorce Scripture from its origin and essence as the written Word is to contravene the historic, orthodox understanding of the Bible. Scripture is not to be equated with events, conversations, or sensory perceptions. Rather, the Bible is propositional, divine revelation conveyed in concrete, written form to a specific people.

Second, Challies implies an inadequate view of inspiration that hints at a distorted relationship between the divine and human author of Scripture. The title of his post is “God Didn’t Write a Book.” He explains the meaning of the title in his introduction: “The Bible is a book—God’s book. Even a child knows this, right? Except that the Bible isn’t a book. Not really.” Challies argues that the Bible is not a book, and hence it is incorrect to assert that God wrote a book. Yet this implies, conversely, that God did write the Bible or was, in a way of speaking, the exclusive or primary agent in the writing of Scripture. Although portions of the Law are described as having been written by God (Exod 31:18; 32:16), the vast majority of Scripture originates through the writing of divinely-superintended human authors. Challies’s brief allusion to inspiration amounts to a variation of the dictation theory or, worse, a view of Scripture analogous to the Mormon doctrine of special revelation as divine bequeathal. The traditional understanding affirms, instead, that the Holy Spirit superintended the human authors of Scripture by means of a sovereign, concurrent relationship. The apostle Paul describes this process in 1 Cor 2:13: “This is what we speak, not in words taught us by human wisdom but in words taught by the Spirit, explaining spiritual realities with Spirit-taught words” (NIV).  Paul’s phrase “Spirit-taught words” suggests neither mechanical dictation nor mere divine influence. Rather, it affirms that the Spirit guided Paul and the other biblical writers in the verbalization of Scripture such that there was a living integration of divine truth with the individual person, style, and vocabulary of the writer. God “carried along” the biblical writers (2 Pet 1:21) as they wrote the God-breathed Word of God.

Third, Challies blurs the categories within special revelation. Traditionally understood, special revelation consists of a number of elements, including miracles (Exod 5:1–2), the lives of believers (2 Cor 3:2–3), the person of Jesus Christ (Heb 1:2), and the Bible (Heb 1:1). The Bible is thus a subset of special revelation as one of its channels, albeit a primary one. Challies tends to conflate these categories, however, and thus equivocates on the nature of the term Bible (he equates the Bible at times with the printed book and at times with Scripture). He suggests that the Bible in its original state consisted of events and conversations remembered and related by believers to one another, thus merging several channels of special revelation (e.g., miracles, the lives of believers, and the Bible) into a catch-all category labeled, “the Bible.” This nebulous categorization fails to present the Bible clearly in its essential form as written and authoritative revelation.

Challies offers a helpful corrective to those who mistakenly assume that the Bible has always existed as a printed book. His corrective falls short, however, of a clear and thorough presentation of the nature of Scripture. Jesus’ own affirmation that “the Scripture cannot be broken” (John 10:35) underscores the necessity of a proper understanding of what the Bible is. We must take care that we present the doctrine of Scripture clearly and carefully so that we do not undermine its authority and credibility.