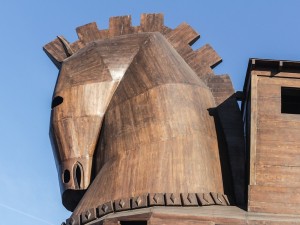 Last month my colleagues and I had the opportunity to attend the annual meeting of the Evangelical Theological Society (for more on the purpose and value, as well as the shortcomings of ETS, see Dr. Snoeberger’s recent blog post). Although I attend the conference for a variety of reasons, a primary aim is to listen to conversations taking place that will likely shape future doctrinal formulations within the broader evangelical church. One of the topics that I heard repeatedly—and that I want to address briefly—is the concept of “divine accommodation” as it relates to the nature of Scripture, in my case particularly the Old Testament.

Understood popularly, divine accommodation is often taken to mean that, given the feebleness of human understanding, especially as this relates for many to the barbaric, benighted ancient Israelites, God condescended in various portions and in various ways to clothe divine revelation in a form that humans better might grasp with their limited understanding and (paganish) cultural milieu. This approach was taken at the conference, for example, to explain how God (read: mostly Moses) condoned genocide in Deuteronomy and Joshua. From this perspective, God accommodated himself to the brutish, nasty war practices of the ancient Near East in not merely allowing but positively stipulating that Israel exterminate the Canaanites (for what I believe is a more biblically consistent approach to the Canaanite conquest, see here). Elsewhere, versions of divine accommodation were used to buttress a variety of positions with respect to the gender debate, OT covenant forms, and biblical hermeneutics.

Often in Reformed tradition appeal is made here to John Calvin and his reference to God’s “lisping,” in adopting a form of baby talk in Scripture. Although Calvin certainly does not build his entire doctrine of Scripture on this point, in one passage of The Institutes of Christian Religion he uses this analogy to describe how the infinite God discloses himself to finite humans: “For who even of slight intelligence does not understand that, as nurses commonly do with infants, God is wont in a measure to ‘lisp’ in speaking to us? Thus such forms of speaking do not so much express clearly what God is like as accommodate the knowledge of him to our slight capacity” (I.xiii.1). What we must note first in this statement, however, is what Calvin is not saying. He is not asserting that human language is inadequate to disclose the nature of God nor is he suggesting that God allowed for human error in Scripture to account for faulty human intelligence. Elsewhere Calvin delineates clearly the integrity and authority of Scripture: “When that which is set forth is acknowledged to be the Word of God, there is no one so deplorably insolent—unless devoid both of common sense and of humanity itself—as to dare impugn the credibility of Him who speaks. Now daily oracles are not sent from heaven, for it pleased the Lord to hallow his truth to everlasting remembrance in the Scriptures alone” (Institutes, I.vii.1).

What then are we to make of such efforts, under the guise of divine accommodation, to weaken biblical inerrancy? Let me suggest two initial responses in the hope of stimulating further thought:

Wayne Grudem, “Scripture’s Self-Attestation and the Problem of Formulating a Doctrine of Scripture,” in Scripture and Truth, ed. D. A. Carson and John Woodbridge, 19–59 (Grand Rapids: Baker, 1992).