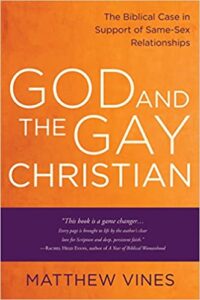 Some of my previous university students, many of them bright students, have embraced the view that homosexuality is biblically acceptable. I have seen this trend especially among those who either embraced homosexuality themselves or are close to others who have embraced this lifestyle. In a conversation with one of the students recently, she indicated that I needed to read more on the topic. I chose the book God and the Gay Christian because it appears to be the most popular book on the topic.

I can see the appeal of the book. It is written in a simple and endearing style. Further, the author, Matthew Vines, argues for the authority of Scripture throughout. He attempts to make the case for the acceptability of homosexuality within the biblical corpus. For those unfamiliar with the arguments made in favor of his case, the mountain he has chosen to climb may seem unconquerable. Nevertheless, many have found his case convincing. I read the book hoping to understand how my former students came to accept such a position.

As with most arguments, the most important occur at the foundation. I would say that Vines presents two major arguments for the pro-homosexual position. First, Jesus said that a good root produces good fruit. Second, when the Scriptures speak of homosexuality, they are not talking about the same type of homosexuality we are talking about today. Let’s examine these in turn.

Now I am simplifying his argument, but I would argue that this is a fair representation of his case in chapter one. A few responses may be leveled against this argument. First, he forms his argument in such a way that Christians are opposing loving, committed homosexual relationships. But this is far from the norm within the homosexual community. Simply watch video of a pride parade (actually, I would strongly suggest you do not), and it will prove the point. Of course, I am not denying that there are homosexual couples who have embraced these values; I am simply noting that it is far from the norm. There appears to be a deep connection between homosexuality and the breaking of God’s norms in other realms (a connection I think is borne out in Romans 1).

Second, throughout the book, Vines is concerned with the horizontal element of sin: sin is that which harms another person or oneself. Such a perspective is good as far as it goes, but it is incomplete. There is also a vertical dimension to sin. God created the world to operate in a certain way. As Creator, He has the right to determine how we ought to live. This brings me to a slightly related point, Vines’s argument may also be used to defend bestiality, for the one who practices this could show great loyalty, devotion, etc. (a good root?), and yet they would certainly feel rejected by the church (a bad root?).

Third, Vines assumes that the feelings of rejection and self-hatred are caused by the rejection of the church. To some extent this is likely true, for social ostracization is emotionally difficult. One purpose of church discipline is to cause angst amongst the sinner, causing him to reconsider his ways. He needs to be aware that censure by the church is a precursor to eternal censure by God. Accordingly, if homosexuality is wrong, then censure by the church is a gift of grace, and the feeling of rejection is designed to call the sinner to repentance. In addition, Vines never considers whether the conscience of the individual may also be responsible for such feelings, a point I think likely.

A Different Kind of Homosexuality

As one would expect from an author who appeals to the authority of Scripture, there is some exegetical engagement in the text. He covers the story of Sodom and Gomorrah (ch. 4), the Leviticus “abomination” passages (ch. 5), Paul’s statements about homosexuality in Romans 1 (ch. 6), and the claim that gay people will not inherit the kingdom of God (1 Cor. 6:9–10; ch. 7). In each case, Vines argues that the text may not mean what we think it means, but even if it does, it is talking about a different type of homosexuality than we are talking about today.

Instead of dealing with the exegetical arguments, I want to focus on his core argument that the type of homosexuality spoken of in the Bible is different than that of the ancient world. The key claim here is that the ancient world condemned homosexuality because it effeminized men. The Scriptures know nothing about men who are incontrovertibly attracted to men. We know today that such people exist (as well as women attracted to women), but since the culture of the biblical times did not know such people existed, the Scripture could not be speaking about them. When “homosexuality” is condemned in Scripture, what is being condemned is male feminization and forceful sexualization of another (e.g., pederasty or homosexual rape).[1]

Now Vines snuck into this argument many presuppositions. One is that there are people incontrovertibly homosexual. He never defends this claim, assuming that it is common knowledge. In fact, he depends on this claim for other arguments in the book. For instance, he says that homosexual Christians must be allowed to marry other homosexuals, because if they cannot and they burn with passion (1 Cor. 7:9), then they cannot escape their temptation (1 Cor 10:13). But is there reason to believe that there are incontrovertible homosexuals? I have not seen such proof. Further, granting the argument that such exist, is God not capable of helping them overcome their temptation? Additionally, if there are such incontrovertible homosexuals, is it possible that they did not exist in biblical times? Further, would God not have known them and addressed their unique situation?

One of the core difficulties of Vines’s argument is that he desires to uphold Scripture in his argumentation, yet his argumentation necessarily critiques the authority of Scripture. How so? He claims that when Scripture speaks against homosexuality, it is speaking against the feminization of men. He then notes that this is patriarchalism and is wrong. Accordingly, on his reading of Scripture these passages are wrong, for they call for social norms that relativize women.

In conclusion to considering Vines’s second argument, let us consider Paul and the Roman Christians: imagine someone from Rome coming to Paul, who has just written the following:

“Because of this, God gave them over to shameful lusts. Even their women exchanged natural sexual relations for unnatural ones. In the same way the men also abandoned natural relations with women and were inflamed with lust for one another. Men committed shameful acts with other men, and received in themselves the due penalty for their error” (Rom 1:26–27 NIV)

The young believer then says to Paul, “But my partner and I have tried to be interested in women and can’t; further, we are committed in a loving relationship.” Do you find it possible that Paul would say, “Oh, well, I wasn’t talking about you then!” It is hard to imagine anyone honestly answering “yes” to that question.

More could be said about this book. I think its enduring legacy is not the rightness of its arguments. Instead, it is the perceived “rightness” of its conclusions. This book is most persuasive for those with hurting hearts (itching ears?) who desire to affirm and finding in a work like this reasons to affirm.

[1] There is a great deal of condensing of his argument here. I think the reader will see that my summary is a fair representation of the case Vines makes in chapters 4–7.