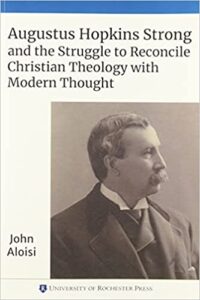 Dr. John Aloisi recently published a book on Augustus Hopkins Strong. Because of a grant, the book is freely available in PDF format, though it is also available in print. Here is the publisher’s introduction:

In the wake of the publication of DarwinsOrigin of Species in 1859, Christianity, or at least many peoples understanding of Christianity, was evolving. The rising popularity of Darwinism combined with the pervasive influence of German idealism began forcing many professing Christians to rethink the faith they had long taken for granted. Among those who would be compelled to face the apparent conflicts between modern thought and traditional orthodoxy was Baptist theologian Augustus Hopkins Strong (1836-1921).&lt;br&gt;&lt;br&gt;As president and professor of systematic theology at Rochester Theological Seminary for forty years (1872-1912) Strong stood as the premier theologian of the Northern Baptists at the end of the nineteenth century. Yet, as author John Aloisi shows in this important study, he remains a puzzling figure. Strong considered himself a defender of orthodoxy even as the school he led transitioned to a more modern and arguably less orthodox understanding of the Christian faith. His Systematic Theology went through eight editions, and the later editions increasingly reflected a shift in his thinking. Strong wrestled with how to reconcile Christian theology with modern thought while also trying to solve tensions within his own theology. He hoped to be able to bring modernists and more traditional Christians together around a concept he labeled ethical monism. In the end, while his effort suggested the task was more difficult than many understood it to be, Strongs journey had a significant impact on the direction of Rochester Theological Seminary. This book is openly available in digital formats thanks to a generous grant from the Andrew W. Mellon Foundation.