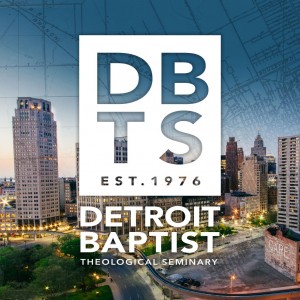 “Fifty years ago many colleges and universities and theological seminaries were devoted to the truth of God’s Word. But one by one they have drifted away, often with all sorts of professions of orthodoxy on the part of those who were responsible for change.”

It sounds like something that was written yesterday. However, this comes from J. Gresham Machen, who delivered this statement in 1929 in his opening address to Westminster Seminary following Princeton Seminary’s capitulation to theological liberalism.

Later in that address Machen talked about the kind of students the new seminary wanted to produce, “Our message is based, indeed, directly upon the Bible….If you want men who know the Bible and who know it in something more than a layman’s sort of way, then call on us. If we can give you such men, we have succeeded; if we cannot give them to you, we have failed.”

The Mission of DBTS

Detroit Baptist Theological Seminary has committed itself to the same kind of work. We exist to serve local churches by shaping faithful men for the gospel ministry through the Word of God.

Faithful churches and training institutions will drift away. Referring to this theological drift, Dr. Rolland McCune used to say, “It’s only a matter of time.” He went on to say that the antidote is holding fast to the Word. No one ever stumbled into becoming a Navy Seal. Instead, it has always required great effort and sacrifice to get to that level. Similarly, no one ever stumbled into becoming a good theologian. Good theology comes through the careful study of the Scriptures.

Training for ministry is not for the weak at heart. We want to produce men who can exhort in sound doctrine and refute those who oppose it (Titus 1:9). Therefore, seminary is necessarily difficult. Detroit Seminary seeks to equip men to know the Scriptures well. It is rigorous work, but it comes with great reward.