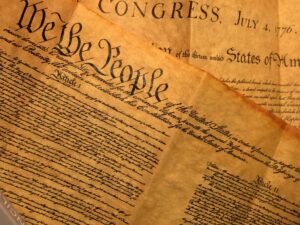 A few years back I made a proposal that we replace the label “literal translation” with a better one—originalism­—a term that has been robustly defined away from competing hermeneutical ideas in the secular/legal sphere.

For decades the dispensationalist has dealt with snickering ridicule from naysayers who believe that being a “literalist” means disavowing all linguistic figures or symbols, and demanding that a single, fixed, plain meaning be assigned to each lexeme for all of its variegated usage throughout Scripture (following, at times, the broadly discredited “law of first mention”). So, for instance, when Jesus calls Herod a “fox,” he must have thought Herod a red, furry animal with a bushy tail. No dispensational “literalist” has ever gone this far, though, admittedly, some older, more rigid literalists occasionally came close. Thankfully, this strange idea died out a good 30–40 years ago. This is not at all what originalism means.

Another variation of literalism used by hermeneuts is the idea of textualism (a.k.a. linguistic determinism), an idea championed by E. D. Hirsch and Supreme Court Justice Neil Gorsuch. For these, meaning is not found in authorial intent, but in the precise words that the author used. Knowing that Gorsuch is a textualist is vital to understanding why he sided, famously, with the liberal majority in expanding the protections of Title VII of the 1964 Civil Rights Act (Bostock v. Clayton County, 2020). Gorsuch argued that the 1964 act, which forbade discrimination “based on sex,” should be read to include practices such as sexual orientation, identity, preference, and the like, because these ideas COULD be included (on strictly semantic grounds) in the phrase “based on sex.” It did not matter to Gorsuch that the legislators who crafted the 1964 Act DID NOT intend to include these sexual practices in Title VII; what matters is that these words COULD be used to include these sexual practices. If the 1964 legislators had wanted to delimit the Civil Rights Act, then they should have used more precise words.

The originalist minority (esp. Alito and Thomas) demurred, arguing that while meaning is most certainly communicated in words, the ideas of sexual orientation, identity, preference, and the like, were not part of the original intention of the legislators when they used the words “based on sex.” The only way to expand the reach of the 1964 Civil Rights Act, they opined, was by new and separate legislation. As such, they held to a kind of historical-grammatical hermeneutic: meaning is contained in words, yes, but subtleties of intention must be discovered in the historical context in which the original legislators wrote.

Dispensationalists hold to the originalist approach to hermeneutics. They believe (1) that meaning is contained in words, (2) that words can have a broad semantic range, (3) that that range is limited in any instantiated use of those words by historical context, and (4) that the original intention of the author is both fixed and impervious to evolution. So, for instance:

It is never acceptable to pick and choose from available semantic options a definition better suited to one’s exegetical-theological preferences (which Carson and Wallace describe as “illegitimate totality transfer”); nor, and more provocatively, is it acceptable to posit non-standard hermeneutical methods that allow secret or additional meanings unknown to the original author (sensus plenior), or that permit the author’s intended meaning to progress over time to a different meaning entirely (typologism).

Originalism is a good idea–whether one is reading the Constitution or the Bible.