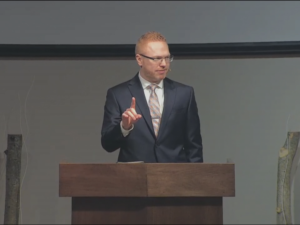 You may have heard about the pastor in Alberta, James Coates, who has been arrested recently in connection with his church’s gathering as a whole for worship (without masks or distancing), which violates the current government restrictions. You can see some details (and slightly different perspectives) here and here. My goal here is not to determine whether or not Coates and his church made the right or wisest decision (though that could be a valuable discussion). Rather, I want to consider a debate that has risen in connection with it—is it legitimate to say that Coates is facing religious persecution?

Some critics have argued that it is misleading or wrong to call this religious persecution, and their conclusion seems to rest on one (or more) of three arguments. I want to consider these arguments and how they might apply to recent and potentially upcoming issues of conflict between Christians and government on issues of sexuality and gender. For example, how would these arguments apply to a Christian baker who believes it would be wrong to bake a cake for a gay wedding, or a Christian operator of a women’s homeless shelter who refused to admit a biological male, or a Christian counselor who does not want to advocate for transition-affirming therapies but instead help the person accept the body God gave him or her?

Argument 1: “It’s not religious persecution because the government is not specifically targeting religions/religious people.”

Some believe it is wrong to see this issue from a religious perspective instead of a more broad civil liberties issue. The government restrictions apply to other kinds of gatherings/institutions/organizations, and someone could be facing the same consequences if they violated the order as a restaurant owner, a bowling alley manager, or a casino operator.

Evaluation: But this same argument applies to the other situations: The government is not specifically targeting the baker because he is a Christian—a Muslim, Jew, or even a secular person opposed to gay marriage would face the same consequences. It doesn’t matter whether or not your homeless shelter is Christian—if your organization is designed for women, then you must include biological men who identify as women. Every counselor is being asked to advocate for transition-affirming therapies—you are not being targeted because you are a Christian.

Argument 2: “It’s not religious persecution because the pastor/church could have found other ways to conform to the government restrictions.”

Others claim this is not religious persecution because the pastor/church could have simply adjusted or accommodated themselves to the restrictions. The government is not specifically saying you cannot meet—it’s only specifying capacity limits and other measures have to be in place, and the church could have adjusted themselves to fall in line with those restrictions.

Evaluation: But could this argument apply to our examples? Consider the following: The baker could have decided not to design cakes for weddings, or sub-contracted the work to someone else. The women’s homeless shelter could become a non-gender specific shelter that was simply designed to house anyone. The counselor does not have to advocate for transition-affirming therapies even if she is not allowed to advocate against them. She could simply keep her opinion to herself and direct the person to someone else who would affirm them.

Argument 3: “It’s not religious persecution because they are wrong to come to the conclusion they have, i.e., this is not behavior that a Christian is compelled to do, and, thus, cannot be Christian persecution.”

This final argument is connected to an important point—not every hardship you face is actually persecution. In fact, you may simply be facing the consequences of your own wrong choices (1 Peter 2:19-20; 4:14-16). Those making this argument claim the pastor/church is wrong to conclude that they need to gather as one body (at least at this time or in these circumstances), so the penalties they face should not be viewed as persecution.

Evaluation: How does this argument apply to our examples? I’ve seen some argue that a Christian baker (or florist, photographer, etc.) should simply serve any person who asks for their services. It’s perfectly fine for a Christian to bake a cake for a gay wedding, so refusing to do so should bring consequences. One could argue that a Christian women’s homeless shelter may have a great opportunity to try to help a biological male who identifies as a woman, so it would be wrong for them to think they could not admit that person. Some professing Christians believe it is harmful to keep someone from transitioning, so in order to love your neighbor a Christian counselor should try to help someone in the transitioning process.

To be clear, I am not necessarily endorsing any of the above arguments. (Nor does it matter right now whether you may agree or disagree with any of them.) The question under consideration is whether or not a person has to actually be right in their position (or indisputably right) before we may believe the backlash they face is religious persecution. I think this argument misses a part of the Bible’s teaching on the conscience.

In Romans 14, Paul notes that there are certain convictions a Christian might hold that are not actually biblically mandated (e.g., not eating meat, observing holy days). They are wrong to come to the conclusion they have. But Paul also notes something significant: if they truly believe that God does not want them to do something (or vice versa) then it would be sinful for them not to act in line with that belief (Rom 14:5, 14, 22-23). So, if someone is convinced that God wants them to act in a particular way (and there is not a clear command to the contrary, e.g., do not steal), the person should act in that particular way.

I think that would apply to all of the situations above. Whether or not they are right, if a Christian is convinced the church must gather as a whole for worship (even at this time or in these circumstances), that a Christian would be sinning by using his artistic abilities to participate in a gay wedding, that it would be sinful to admit a biological male to a women’s homeless shelter, or that a Christian cannot in any way endorse transition-affirming therapies, then they must act in accordance with those beliefs.

In summary, it is legitimate to consider whether or not a person is suffering “as a Christian” (1 Pet 4:16). But that is not determined by whether those bringing the hardship are doing so explicitly because the person is a Christian or whether any Christian might be ok with taking a different path. The question is: Is the person facing this hardship because they are acting in a way they are convinced they must act in order to properly honor Christ? If so, then they are suffering “as a Christian.” Most conservative evangelicals would view fines, penalties, and arrests for the Christian baker, Christian operator of a women’s homeless shelter, or Christian counselor against transition-affirming therapies as religious persecution. Why should we view the situation for James Coates differently?