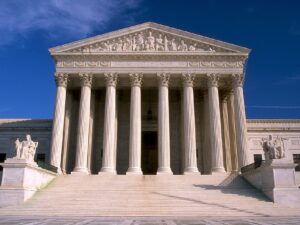 The intersection of Acts 5:29 and 1 Peter 2:13 encapsulates a tension facing many churches today. Harmonizing these texts is not a simple task. Still, it can be done. The simplest harmonization goes something like this: “We must obey the government unless the government explicitly tells us to disobey God.” This is a good starting point for discussion, but the weeds get thick as we swim deeper. Note the following:

Example: If President Trump issues an executive order that all pastors in America must preach a sermon series on 1 Peter 2, I do not need to obey him—even if obeying him does not require me to disobey God. And that’s because he has established an unlawful law, not only according to the American Constitution, but also coram deo.

We Protestants do not believe that failure to participate in certain aspects of ecclesiastical ritual will lead to the loss, once possessed, of our spiritual life (like, say, Romanists do). Still, it is wrong to suggest that assembling, the public reading of Scripture, the sermon, corporate prayer, the singing of psalms and hymns, participation in the Lord’s Table, etc., are dispensable or that they communicate no grace at all. We do all of these things because our spiritual health hinges in no small degree upon them. And we do ourselves an apologetic disservice when we suggest otherwise, whether implicitly or explicitly. We may be able to survive indefinitely in a physical sense without the regular elements of gathered worship, but in terms of spiritual vitality, they are more essential than food itself.