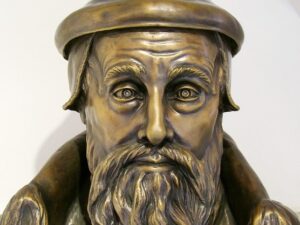 In a recent sermon on Matthew 7:1-5, Dr. Doran mentioned that a portion of that passage is perhaps the most well-known in our culture. People know the phrase, “Judge not, that you be not judged,” even if they do not know where it comes from. The phrase is often used, by non-Christians and professing Christians alike, as a rebuke against Christians who are offering moral evaluations. “Jesus said not to judge,” we are told, thus seeming to pit our Lord and Savior against us.

Though some of the particulars differ, this rejection of judgment is not a novel enemy for the church. One earlier manifestation was addressed by John Calvin in his Treatise Against the Libertines. The Libertines held to a kind of pantheistic determinism, making everything the direct work of God without any human contribution or causation. Calvin noted that one consequence of their false belief was the reality that nothing could be condemned as evil, since God was the one who did it.

Not surprisingly, they appealed to Matthew 7 to support their claim that Christians should not judge anything as wrong or evil. How did Calvin combat this error?

First, Calvin connected the passage to Paul’s admonition in Romans 14 that believers are not each other’s final judges—God is. But if we recognize that God is the judge, then we need to allow his judgments to be our guide. We are not called to render our independent judgment, but we are called to uphold the judgments he has given. The person who refuses to follow the judgments God has already given is the one making himself to be the judge, not the one simply recognizing God’s views on the issue.

“This is a sound and useful doctrine, that as there is only one single spiritual lawgiver, viz., God, so He alone is competent to judge our souls. Nevertheless, this is not to say that His judgments, which He has already rendered, are no longer valid. Hence, when we judge lechery, larceny, blasphemy, drunkenness, and ambition to be evil things, we are not making a judgment of our own, but are only ratifying what God has rendered.

These riffraff, on the contrary, in pretending not to want to judge, make themselves judges superior to God. I ask of you, if after a sovereign judge should have pronounced his sentence, an individual should say, ‘We should leave the matter in doubt, as if nothing had been decided about it, and should not consider the matter that has been condemned as evil,’ should he not deserve strict punishment as a seditious and mutinous person, who wants to rescind all order of justice?

Now these mad dogs, under the pretext of saying that we ought not to judge, revoke all the decisions that God has made and published and say that all the condemnations that He has ever passed are without effect. Nevertheless, we see how it is not lawful for us to attempt to make judgments on our own, but we should hold as good what God has judged and should ratify it by being in accord with it. Hence, in order to testify in His behalf that He is a good and equitable judge, let us condemn with Him all wicked works, and equally following His admonition, let us judge a tree’s goodness or evil according to its fruit.”

Additionally, Calvin notes that Jesus’s concern in Matthew 7 is not judgment itself but hypocritical judgment. It is wrong to condemn in others what we excuse in ourselves. However, our hypocrisy does not excuse the sin. If God has stated that something is evil, it does not cease being evil because someone else is hypocritical in communicating that truth.

“Now there is a vast difference between not judging out of hypocrisy and not judging at all. Our Lord commands us to judge in truth, not being more severe on our neighbors than we are on ourselves. These scum, under that pretext, want to exclude and eliminate all judgments, however reasonable they might be. However, it does not follow that when a hypocrite reproves another by flattering him that a sinner is herein excused. For evil is always under condemnation. But the hypocrite’s vice lies in his not keeping himself under an equal judgment, for while pardoning himself easily he employs an excessive rigor toward others.”

In fact, often those who condemn judgment the loudest demonstrate their own hypocrisy. While they say “Judge not” they are some of the quickest to savage and condemn others when they do not get their way.

“If [things do not happen according to their own will] they forget these grand notions of not condemning [anything], and they become a hundred times more biting and harsher than others.”

Rather than refraining from confronting sin, believers must be driven by their love for God and their love for others to stand on God’s truth. We must not allow those who want to undermine righteous judgments to dull our sensitivity to sin.

“We should have such a zeal for the honor of God that when He is offended we feel an anguish burning in our hearts (Ps 69:10). We should have such an affection for our neighbors that when we see them in danger of ruining themselves, and above all their souls, we should be moved with pity and compassion.

Satan through these wooers would like to render the world stupid, to the end that whatever confusion we might see would no longer matter to us, and we would no longer be upset to see God’s name blasphemed, His holy commandments trespassed, souls lost, or iniquity reigning.”

All quotations from John Calvin, Treatises Against the Anabaptists and Against the Libertines. Translated by Benjamin Wirt Farley. Grand Rapids, MI: Baker Academic, 1982, 256-8.