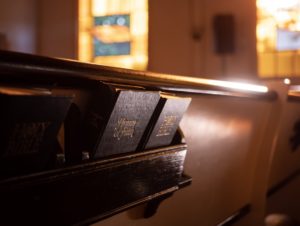 Singing has evolved dramatically throughout Church history. And like many other cultural phenomena, it is evolving more quickly today. This gives our generation a unique opportunity to study that evolution as it happens. I’m not writing today about organs and pianos vs. guitars and drums (though the evolving circumstances of worship are surely not shrug-worthy); in this post I am writing principally, instead, about the content of hymnody.

One of the more startling trends in modern hymnody is the decline in reflective songs about the Christian experience. A quick glance through topical lists in hymnals of earlier vintage divulges a huge array of hymn blocks dedicated to experimental Christianity. Topical indices sported large sections such as “Assurance and Trust,” “Confession and Forgiveness,” “Comfort and Hope,” “Aspiration and Consecration,” “Guidance and Care,” “Contentment,” “Thanksgiving,” “Stewardship and Service,” “Activity and Zeal,” “Christian Warfare,” and so forth. No Christian could fail to find his own experience tucked away among these many hymns, and could receive, from his singing brothers and sisters, the assurance, rebuke, comfort, and instruction suitable to his situation. We knew as we sang that God could meet our every need, and not just our greatest need.

These blocks of hymns did not constitute the whole hymnal (there were also worship songs focused on God’s many attributes; hymns about the person and work of Christ; hymns about the Gospel and Christian missions; etc.); but songs about the Christian experience constituted the biggest block of the songs, and in many cases the majority. This was true even among fairly staid and liturgical hymnals.[1]

Most newer hymnody, where is exists, tends to be dominated by songs about the Gospel, and more specifically, the Gospel as justification. There is nothing wrong, of course, with singing about justification. The New Testament itself seems to commend this practice in its occasional hymnic outbursts. I wonder, though, whether we moderns may be neglecting something that the majority church (historically speaking) rightly emphasized.

The Apostle Paul tells us in his epistles both to the Ephesians and to the Colossians that we ought to sing “psalms, hymns, and spiritual songs.” Much debate surrounds the latter two categories. Some see them as sub-categories of “psalms” and opt for exclusive psalmody or for songs patterned strictly after the psalms. Early Christian practice suggests that “hymns” may possibly have been theological summaries set to poetry, though this is not certain. There is practically no consensus on the definition of “spiritual songs.” But everyone knows what the psalms are. There’s no debate. Paul, it would seem, tells us that Israel’s psalter has been transferred intact to the New Testament Church. It is as much the Christian Psalter as it is Israel’s Psalter.

One might immediately push back that the Psalms contain elements unique to ethnic Israel, and that some things written there in the future tense are now in the past or present tense. This is true, and I would allow adjustments to be made to accommodate the progress of revelation and the administrative changes God has instituted. But these few exceptions should not distract us from the fact that, in the main, the experiences that prompted the psalms are the same in kind as those had by believers in every age. There are psalms about the human condition, sin, repentance, forgiveness, sickness, persecution, discouragement, want, grief, frustration, trials, loss, death, the afterlife, children, grandchildren, industry, learning, nature, providence, contentment, gratitude, redemption, the law, grace, hope, joy, peace, triumph, and on and on and on. The psalms address, more comprehensively and incisively than any human hymnal ever has, the full range of human sentiments experienced in the life of faith. Israel sang about these things, and according to Paul, so should we. And if our hymnal does not look at least something like the Hebrew psalter, we probably should tinker with it a bit.

One might also push back that the Christian experience flows out of the Gospel, rendering the Gospel a more prominent theme today than it was then. I agree with this sentiment in part. The Christian experience does indeed flow out of the Gospel. But here’s the thing: the experience of the believing Israelite flowed out of the Gospel too. It’s not as though the essence of the Gospel changed with the death and resurrection of Christ. Granted, some of the visible expressions of sanctification have changed a bit (circumcision, holy days, and Mosaic minutiae are out; baptism, local churches, and the Law of Christ are in); and some of the specifics of the Gospel are clearer today than they were in the OT. But when it comes down to the basics of the Gospel, Israel was not in the dark. They knew about justification. They knew that their justification was by faith and not by works (Abraham had taught them that). And they knew that obedience to the Law, while important, was a matter of sanctification, not justification. But they also seemed to grasp (far better than many modern Christians), that the believer’s everyday experience coram deo (i.e., his sanctification) was not tied principally to the forensic aspect of the duplex beneficium of the Gospel (justification), but to the experimental aspect (new birth and willing participation in the life of God). And this is what dominated their songs.

It’s not as though songs about justification are bad. But in the main, Israel’s songs assumed the forensic foundations of the Gospel and expanded into areas often left unexplored in modern hymnody. And as a result, Israel’s hymnal was theologically mature, refreshingly diverse, and surprisingly relevant. We probably ought to check it out again.

[1]The subheadings in the previous paragraph all derive, incidentally, from the 1957 Worship & Service Hymnal, in which 244 of its 525 congregational hymns fall under the heading: “The Christian Way of Life.”