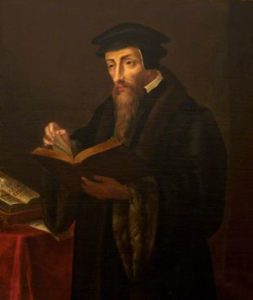 In Philippians 2:20-21, Paul gives a recommendation for Timothy that all those who serve Christ should covet: “I have no one like him, who will be genuinely concerned for your welfare. 21 For they all seek their own interests, not those of Jesus Christ.”

In commenting on verse 21, John Calvin offers a direct and challenging exhortation to those who would serve Christ, an exhortation pastors and those preparing to be pastors need to hear again today. One of the greatest dangers for pastors is to pursue their own interests rather than those of Christ. While they are ostensibly serving Christ, they are actually serving themselves. Thus, they are never content where they serve, or unwilling to go to difficult and challenging places to serve Christ because of the sacrifice it would entail. But as Paul states, we cannot truly seek the interest of Christ if we are seeking our own. May God protect the church and its leaders from this danger.

[Paul] does not speak of those who had openly abandoned the pursuit of piety, but of those very persons whom he reckoned brethren, nay, even those whom he admitted to familiar intercourse with him. These persons, he nevertheless says, were so warm in the pursuit of their own interests, that they were unbecomingly cold in the work of the Lord. It may seem at first view as if it were no great fault to seek one’s own profit; but how insufferable it is in the servants of Christ, appears from this, that it renders those that give way to it utterly useless. For it is impossible that the man who is devoted to self, should apply himself to the interests of the Church. Did then, you will say, Paul cultivate the society of men that were worthless and mere pretenders? I answer, that it is not to be understood, as if they had been intent exclusively on their own interests, and bestowed no care whatever upon the Church, but that, taken up with their own individual interests, they were to some extent negligent to the promotion of the public advantage of the Church. For it must necessarily be, that one or other of two dispositions prevails over us — either that, overlooking ourselves, we are devoted to Christ, and those things that are Christ’s, or that, unduly intent on our own advantage, we serve Christ in a superficial manner.

From this it appears, how great a hinderance it is to Christ’s ministers to seek their own interests. Nor is there any force in these excuses: “I do harm to no one“ — “I must have a regard, also, to my own advantage” — “I am not so devoid of feeling as not to be prompted by a regard to my own advantage.” For you must give up your own right if you would discharge your duty: a regard to your own interests must not be put in preference to Christ’s glory, or even placed upon a level with it. Whithersoever Christ calls you, you must go promptly, leaving off all other things. Your calling ought to be regarded by you in such a way, that you shall turn away all your powers of perception from everything that would impede you. It might be in your power to live elsewhere in greater opulence, but God has bound you to the Church, which affords you but a very moderate sustenance: you might elsewhere have more honor, but God has assigned you a situation, in which you live in a humble style: you might have elsewhere a more salubrious [health-giving] sky, or a more delightful region, but it is here that your station is appointed. You might wish to have to do with a more humane people: you feel offended with their ingratitude, or barbarity, or pride; in short, you have no sympathy with the disposition or the manners of the nation in which you are, but you must struggle with yourself, and do violence in a manner to opposing inclinations, that you may keep by the trade you have got; for you are not free, or at your own disposal. In fine, forget yourself, if you would serve God.

John Calvin, Commentaries on the Epistles of Paul the Apostle to the Philippians, Colossians, and Thessalonians, trans. John Pringle (Eugene, OR: Wipf and Stock) 76-78.