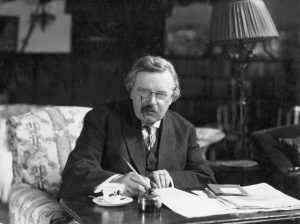 I’ve always had a soft spot for people who were so insightful and influential that they end up being credited with witty statements they never said. G. K. Chesterton is a great example of that phenomenon. Perhaps the most well-known apocryphal account is that Chesterton replied to a newspaper’s question of “What is wrong with the world” with the short response “Dear Sirs, I am” (I first remember hearing it from D.A. Carson, who introduces his talk on the “The God Who Does Not Wipe Out Rebels” with a version of this account).

Often the faulty quotes and apocryphal statements stem from something the person did say. Jordan Poss (my friend and former classmate) recently tracked down what is likely the original basis for this Chesterton account—a letter to the editor in the Daily News from 1905. In his post Jordan very helpfully included the text of the letter.

The beginning of the letter, which includes the origin statement for the famous apocryphal account, is a good reminder for many in our day who believe that our ultimate hope lies in politics or economics. Those things are not meant to deal with our deepest defects and desires. We need a true Savior, one who can deal with the root of our problem—our own depravity.

“One thing, of course, must be said to clear the ground. Political or economic reform will not make us good and happy, but until this odd period nobody ever expected that they would. Now, I know there is a feeling that Government can do anything. But if Government could do anything, nothing would exist except Government. Men have found the need of other forces. Religion, for instance, existed in order to do what law cannot do—to track crime to its primary sin, and the man to his back bedroom. The Church endeavoured to institute a machinery of pardon; the State has only a machinery of punishment. The State can only free society from the criminal; the Church sought to free the criminal from the crime. Abolish religion if you like. Throw everything on secular government if you like. But do not be surprised if a machinery that was never meant to do anything but secure external decency and order fails to secure internal honesty and peace. If you have some philosophic objection to brooms and brushes, throw them away. But do not be surprised if the use of the County Council water-cart is an awkward way of dusting the drawing-room.

In one sense, and that the eternal sense, the thing is plain. The answer to the question “What is Wrong?” is, or should be, “I am wrong.” Until a man can give that answer his idealism is only a hobby.”