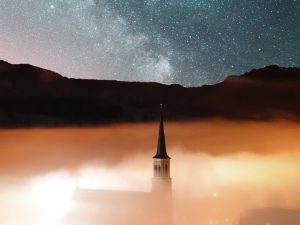 I first came across the phrase “overrealized eschatology” in a seminary class on the exegesis of 1 Corinthians. The idea had been suggested by the commentator C. K. Barrett to describe how, in his view, the Corinthian church had mistakenly come to believe that the end times were already fulfilled. Barrett understood the apostle Paul to be chiding these believers for “behaving as if the age to come were already consummated, as if the saints had already taken over the kingdom.” He concludes that “for them there is no ‘not yet’ to qualify the ‘already’ of realized eschatology” (109). Anthony Thiselton picked up the idea and popularized it as “over-realized eschatology” in a journal article a decade later (New Testament Studies [1978]). He argued that this overrealized eschatology had spawned in the church a host of problems that Paul was compelled to address. The Corinthians believed erroneously that all the spiritual blessings had been poured out, leaving them “emancipated” to do anything in the context of the church (512).

The phrase “overrealized eschatology” aptly describes the sense I got recently in reading a collection of essays entitled Progressive Covenantalism (B&H, 2016). As a movement progressive covenantalism (PC) is of recent vintage, self-consciously styled as a third way between dispensationalism and covenant theology. Its proponents hail primarily from the circle of the Southern Baptist Theological Seminary. The origin of the approach harks back to the 2012 publication of Kingdom through Covenant by two SBTS professors, Stephen Wellum and Peter Gentry. Despite its recent origin, PC bears a family resemblance to the older New Covenant Theology.

To summarize the view in a concise way proves a challenge given that one senses it is a moving target. I may, nonetheless, suggest two key tenets that capture its essence. First, PC argues that the now-inaugurated new covenant has fulfilled and consummated the previous biblical covenants (e.g., Abrahamic, Mosaic, Davidic). Second, PC argues that Christ, as the mediator of the new covenant and the goal of OT prophecy, is the new Israel and thus the beneficiary and arbiter of all OT promises directed to the nation. As an implication, PC allows no future redemptive work or kingdom mediation for the nation Israel apart from the church; therefore, land promises in the OT await consummation in the new creation.

While a full-scale critique lies beyond my intent for this brief post (see, e.g., here and here), I want to underscore what I believe to be a fatal flaw in the theological synthesis of PC. Similar to the misapplication of prophetic fulfillment in the overrealized eschatology of the Corinthian church, PC collapses the “not yet” of eschatology into its “already.” For these proponents of PC, Christ has already fulfilled the land, seed, and blessing provisions of the Abrahamic Covenant (30–32). Christ has already fulfilled the calling, vocation, and role of the nation Israel (44). Christ has already inaugurated all the blessings, spiritual and material, of the new covenant (240). These propositions imply that relatively little prophetic content awaits fulfillment in the eschaton. Such a conclusion, however, lies in contrast with several key affirmations from the NT pointing in a different direction.

First, if Christ has already fulfilled the foregoing, why does Paul allow, even after the epoch-shifting resurrection and ascension of Christ, a clear pattern of “Jewishness” in the church? For example, Paul has Timothy circumcised (Acts 16:3). Paul makes and fulfills a vow clearly connected to the Mosaic Law (Acts 18:18; 21:23–24). Paul admits of Jewish observance of food, days, and practices for those whose consciences dictate (Col 2:16; Rom 14:5–6). Paul allows for observance of the Law among practicing Jews (Acts 21:20–24). Second, if Christ has already fulfilled the foregoing, why is Israel connected to a future work of redemption in the NT, as in Acts 3:12–21; Rom 11:26–31; Rev 7:4–8? While the treatment of these passages requires careful exegesis beyond these limitations of space, one may ask a simple question. If the apostles Peter, Paul, and John intended to convey prophetic truth about the future redemption of the church after its inauguration, why confuse the issue by referring to Israel at all? Third, if Christ has already fulfilled the foregoing, why is the new covenant everywhere connected explicitly to the consummation of the Mosaic covenant rather than of any other biblical covenants? The biblical writers argue carefully that the purpose of the new covenant is to rectify the shortcomings of the Mosaic covenant rather than to exhaust and abrogate the Abrahamic covenant (Jer 31:31–32; 2 Cor 3:5–18; Heb 8:1–13). PC appears to overload the new covenant at this point.

While the theological issues surrounding these discussions are complex, PC falls short in its effort to correlate the truth of Scripture. Its overrealized eschatology has collapsed the “not yet,” particularly the promises to Israel, into the “already” of Christ’s first advent and present session. Such a hermeneutic unfortunately violates the clarity, reliability, and meaning of OT promises and prophecies. Moreover, it nullifies “the hope of Israel” to which Paul wholeheartedly clung to the very end of his recorded ministry (Acts 28:20; 9:3–5; 11:26–27).