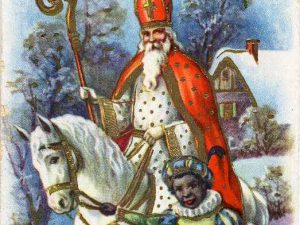 It’s that time of year when grocery store clerks, kind-hearted relatives, and even complete strangers ask children what they want Santa Claus to bring them. And it’s also a time when Christian parents struggle to help their children answer such people in a way that is both truthful and appropriate. Amidst the cultural clutter that surrounds the legend of Santa Claus, the true story of St. Nicholas has been largely lost.

Nicholas was born to Greek parents in Asia Minor in the late-third century. Growing up in a middle-class home, Nicholas received a solid Greek education. He may well have read classics such as Homer’s Iliad and Odyssey as well as the Septuagint and books of the NT in Greek. Under unknown circumstances (plague?), Nicholas lost both of his parents as a teenager and inherited significant wealth. But rather than squandering it, he was apparently moved to share his resources with others. And so due to a number of incidents in which Nicholas aided those in financial difficulties, he became associated with the giving of gifts and especially gifts to children.

As an adult, Nicholas became a church leader in the coastal city of Myra (in modern-day Turkey). A number of legends have grown up around his life. But by some accounts, Nicholas took part in the Council of Nicaea in which the doctrine of Christ’s full deity was defended against the teachings of Arianism, and by “took part” I mean there’s even a legend that Nicholas punched the heretic Arius at the council. This legend, incidentally, has given rise to some of my favorite non-traditional depictions of Santa Claus.

Although many details about Nicholas’s life are unknown and some of what is “known” about him border on the mythical, Nicholas was by all accounts a generous early church leader and a faithful defender of orthodoxy, and so there’s really no reason for Christians to knock the historical “St. Nick”.