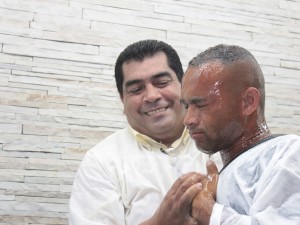 Peter said to them, “Repent, and each of you be baptized in the name of Jesus Christ for the remission of sins; and you will receive the gift of the Holy Spirit” (Acts 2:38).

Peter’s exhortation delivered at Pentecost has been the source of ongoing debate. Virtually all engaged in the debate take the command “be baptized” as referring to water baptism (cf. 2:41; 10:47; 11:15) and most understand the phrase “for the remission (forgiveness) of sins” as a synonym for justification or salvation.

The question stirring the debate is: (1) What is the relationship between the two commands “repent and be baptized” and the clause “for the forgiveness of sins”? (2) Or, more specifically, how are we to understand “be baptized…for the forgiveness of sins”? Is Peter identifying water baptism as a condition for salvation or should Peter’s exhortation be interpreted in some other way?

At the heart of the controversy is the meaning of the preposition “for” (εἰς) in the phrase “for the forgiveness of sins.” There are two basic views. A number of interpreters take the preposition as telic, identifying forgiveness as the goal or outcome of the two commands “repent and be baptized.” The resulting translation would be “repent and…be baptized in order to receive the forgiveness of sins.” Accordingly, water baptism, along with repentance, represents a necessary condition for salvation.

Others interpret the preposition as causal and take the phrase “for the forgiveness of sins” as modifying only the second command, the command to be baptized. In this case, the translation would be “repent, and [having done that]…be baptized in response to the forgiveness of sins.” In other words, Peter is saying that those who respond to his message and repent are to be baptized, because, having repented, their sins are [at that moment] forgiven. With this interpretation, water baptism represents a consequence of salvation, not a condition for it.

While recognizing that a number of interpreters discount the causal use of this preposition altogether, there are at least two passages in the NT that effectively support it. The first is Matthew 12:41. In this verse, Matthew writes, “The men of Nineveh will stand up in the judgment with this generation and condemn it, for they repented at (εἰς) the preaching of Jonah, and behold, one greater than Jonah is here.”

The key to the interpretation of the preposition in this verse is to identify the precise relationship between the two expressions the preposition connects, that is, between repentance and the preaching of Jonah. In order to make this identification, two questions need to be asked and answered.

The first question is, Is there a temporal sequence between the preaching of Jonah and the repentance of the Ninevites? The answer to the first question is clearly yes. According to the historical record, Jonah preached, and, following this, the Ninevites repented. Jonah 3:4–5 reads, “And Jonah began to go through the city…and he cried out and said, ‘Yet forty days and Nineveh will be overthrown.’ Then the people of Nineveh believed…and they called a fast.”

The second question is, Is there, in addition, a logical relationship between these two activities? Again, the answer to this question is also clearly yes. The repentance of the Ninevites was in response to or based on Jonah’s preaching. According to Jonah 3:9, the king’s call for national repentance was in the hope that God would relent of the impending judgment that Jonah had proclaimed. Thus, the nation’s repentance was in direct response to Jonah’s message.

The issue ultimately is not whether there are other ways this prepositional phrase in Matthew 12:41 could be rendered in English. Undoubtedly there are. The issue centers on what is the most probable semantic relationship between Jonah’s preaching and the Ninevites’ repenting as suggested by the immediate contexts. If the meaning of a word is based on its use in a given context, the evidence strongly supports that the relationship between Jonah’s preaching and the Ninevites’ repentance is that they repented “in response to” the preaching of Jonah. By any other name, this is what is meant by the causal use of the preposition that links the two activities.

The second verse in the NT supporting the causal use of the preposition is Matthew 3:11. In this verse, Matthew records a statement by John the Baptist where John contrasts his baptism with that of the Lord’s. Describing his own baptism, John declares, “I indeed baptize you with water for (εἰς) repentance…” John’s declaration is significant for the present discussion in that both here in Matthew 3:11 and in Acts 2:38 the verb “baptize” is used and the verb is modified by the same preposition (εἰς).

As with Matthew 12:41, the question that needs to be considered in Matthew 3:11 is, What is the relationship between the two activities connected by the preposition, between John’s baptism and repentance? From Matthew 3:7–8, it is apparent that John demanded repentance as a prerequisite for his baptism. When the Pharisees and Sadducees came to John to be baptized by him, he rebuked their hypocrisy and demanded that they “bring forth fruit in keeping with repentance.” It may be concluded from this that one could not undergo John’s baptism without first showing evidence of repentance. Thus, a baptism “for repentance” meant a baptism that was “based on” repentance. Again, by any other name, this is what is meant by the causal use of the preposition linking the two activities.

This post has focused on the first challenge against a causal interpretation of the Greek preposition “for” (εἰς) in Acts 2:38. The next installment will deal with the second challenge.[1]

[1] This two-part series is a much shorter argument for what is published in the following article: “Water Baptism and the Forgiveness of Sins in Acts 2:38,” DBSJ 4 (1999), 3‒32