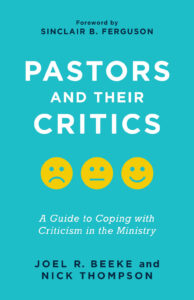 Ok, the title of this post is a bit misleading. The following quote from Sinclair Ferguson is not directly about the Rice Lecture this Friday, but it is about the book Dr. Joel Beeke co-authored on pastoral criticism, which focuses on the same topic as the lecture for this Friday. The following is from Ferguson’s foreword to the book.

“Pastors and Their Critics is brief by comparison with Dr. Joel Beeke’s “major” works. But, make no mistake, this is one of the most important books he has written. Indeed, I suspect it may help as many people as his major treatises—not only the ministers, for whom he has written it, but all of us, whether pastors or people….

Joel Beeke is a theologian and trainer of pastors. He has also been a model and mentor to other pastors because he himself is a pastor. He is, therefore, equipped to give counsel that not only encourages but also challenges us all. There is a message here for every Christian—for the self-pitying pastor (“Why am I being so unjustly criticized?”) and the self-assured one (“Surely they can’t possibly be criticizing someone with my gifts and position!”), and the critical church member who enjoys having “roast pastor” for Sunday lunch and nibbles at the leftovers during the rest of the week—if we have the honesty to recognize ourselves. The counsel given in Pastors and Their Critics will prepare the seminary student for his calling and give stability to the pastor in his ministry. It underlines the fact that as it was with the Master and his apostles and prophets, so it will be with us: we will experience criticism; we should expect nothing less. Nor should we ever lose sight of our blessings: the high privilege of ministry and people who encourage us. And we should not forget that the Lord can use even hostile instruments to sanctify us and make us fruitful. At the end of the day, the only words that will really matter to us will be our Lord saying, perhaps in a way that brings us to tears of mingled relief and unimaginable bliss, “Well done . . . faithful servant. . . . Enter into the joy of your Lord.”

You can register for the Rice Lecture here.